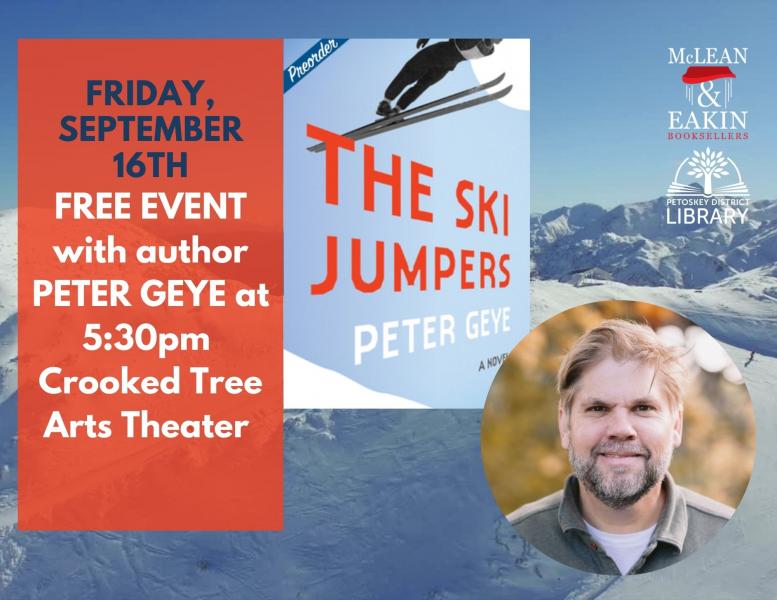 Join us at the Crooked Tree Arts Theater on Friday, September 16th at 5:30 pm with author Peter Eye celebrating his new book “Ski Jumpers”. Please RSVP by emailing or calling us with your name, email address and the number of people in your party.

We're looking forward to seeing everyone there!

A brilliant ski jumper has to be fearless—Jon Bargaard remembers this well. His memories of daring leaps and risks might be the key to the book he’s always wanted to write: a novel about his family, beginning with Pops, once a champion ski jumper himself, who also took Jon and his younger brother Anton to the heights. But Jon has never been able to get past the next, ruinous episode of their history, and now that he has received a terrible diagnosis, he’s afraid he never will.

In a bravura performance, Peter Geye follows Jon deep into the past he tried so hard to leave behind, telling the story he spent his life escaping. It begins with a flourish, his father and his hard-won sweetheart fleeing Chicago, and a notoriously ruthless gangster, to land in North Minneapolis. That, at least, was the tale Jon heard, one that becomes more and more suspect as he revisits the events that eventually tore the family in two, sending his father to prison, his mother to the state hospital, and placing himself, a teenager, in charge of thirteen-year-old Anton. Traveling back and forth in time, Jon tells his family’s story—perhaps his last chance to share it—to his beloved wife Ingrid, circling ever closer to the truth about those events and his own part in them, and revealing the perhaps unforgivable violence done to the brothers’ bond.

The dream of ski jumping haunts Jon as his tale unfolds, daring time to stop just long enough to stick the landing. As thrilling as those soaring flights, as precarious as the Bargaard family’s complicated love, as tender as Jon’s backward gaze while disease takes him inexorably forward, Peter Geye’s gorgeous prose brings the brothers to the precipice of their relationship, where they have to choose: each other, or the secrets they’ve held so tightly for so long.

Peter Geye is author of the award-winning novels Safe from the Sea, The Lighthouse Road, Wintering (winner of the Minnesota Book Award), and Northernmost. He teaches the yearlong Novel Writing Project at the Loft Literary Center. Born and raised in Minneapolis, he continues to live there with his family.

A brilliant ski jumper has to be fearless—Jon Bargaard remembers this well.

ONE OF HOUSTON CHRONICLE'S BEST BOOKS OF THE YEAR

From the acclaimed author of Wintering: a thrilling ode to the spirit of adventure and the vagaries of loss and love.

"A beautiful, big-hearted, triumphant novel.”—Nathan Hill, author of The Nix

A true epic: a love story that spans sixty years, generations’ worth of feuds, and secrets withheld and revealed.

Against the wilds of sea and wood, a young immigrant woman settles into life outside Duluth in the 1890s, still shocked at finding herself alone in a new country, abandoned and adrift; in the early 1920s, her orphan son, now grown, falls in love with the one woman he shouldn t and uses his best skills to build them their own small ark to escape.

Safe from the Sea (Paperback)

Set against the powerful lakeshore landscape of northern Minnesota, Safe from the Sea is a heartfelt novel in which a son returns home to reconnect with his estranged and dying father thirty-five years after the tragic wreck of a Great Lakes ore boat that the father only partially survived and that has divided them emotionally ever since.