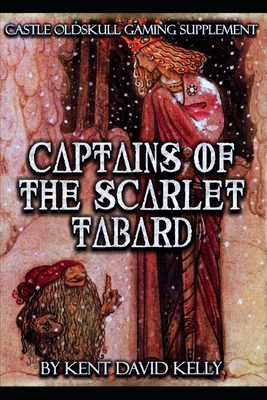 
Usually Ships in 1-5 Days
Wrath and ruin,
Gold for blood,
Enemy of evil,
The Order of the Scarlet
Stands forever in defiance.
In vigilance we stand,
In valor we fight
Long live Lord Artorius,
And all glory to Grimrook A sequel to the 2018 mercenary soldier supplement The Order of the Scarlet Tabard, CAPTAINS is a companion volume which unveils the secrets of the most famous mercenary company to rise within the World of Oldskull. Herein, you will learn of the Order's history, tactics, ranks, and organization, with capsule descriptions of all the most grizzled and doughty mercenary captains that the Free City State of Grimrook dares to offer. You'll learn of the Order's grinning half-ogre battering ram, the deadly oil-wielding "Burninators," dogs of war, terrifying treasure carters, master halberdiers, dungeon falcons, shield walls, and more. Those ever-reliable men-at-arms who keep your heroes alive as they delve through dungeons deep are back in force, proving that men-at-arms are always exciting and entertaining, never boring. If you've never yet thought of mercenaries as being epic supporting players, the you've never seen the Order in action Your campaign's adventuring parties can maximize their survivability (and fun) by just plunking down a few gold coins in the name of these infamous Redshirts ... men and women o' the scarlet - ready to fight and die, one for all - in their glorious pursuit of hard-won lucre and a reason to be remembered for the ages. Point these PC-hired NPCs toward your world's orcs and ogres and let the bloody mayhem unfold This supplement has been written to honor the generous contributors who participated in the highly successful 2019 Castle Oldskull / Bundle of Holding charity and funding drive. Participants raised over $2,000 for the Breast Cancer Research Foundation, generating over $22,000 in total sales of more than 6 million pages' worth of Castle Oldskull gaming lore. In recognition of their spirit, all of the NPCs featured in this volume are partly inspired by the user names of the top-funding contributors. Ladies and gentlemen of the Bundle, consider yourselves immortalized in the Chronicles of Oldskull.