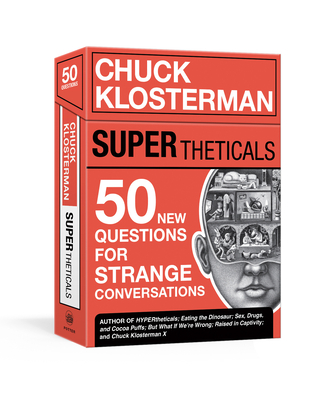 
Usually Ships in 1-5 Days
From the king of pop philosophy and renowned author of the runaway hit card game HYPERtheticals comes more wild conversation starters featuring a range of unique new prompts. This new card deck, infused with Klosterman’s trademark wit, asks you to take a stand on matters of morality, social taboo, and personal identity.

• Each card features an outlandish scenario that begins with “Imagine a person,” bound to prompt lively discussion in any environment: Imagine a person who is your genetic clone, a perfect replica of you raised by different people in a different place. It comes to your attention that your clone is trying to destroy you, and you have three options: go into hiding, find your clone and attempt to reason with it, or attempt to destroy your clone before it destroys you. What would you do?
• The cards range in theme, allowing you to select the perfect cards for any audience, whether friends, coworkers, or family.
• Each card is color-coded to distinguish between kid-friendly and adult-only topics, as well as to mark questions that might provoke the deepest discussion, making for a truly versatile and revealing experience.
Along with his work on the HYPERtheticals deck, Chuck Klosterman is also the bestselling author of eight books of nonfiction (including Sex, Drugs, and Cocoa Puffs; But What If We're Wrong?; and Chuck Klosterman X) and two novels (Downtown Owl and The Visible Man). He has written for The New York Times, The Washington Post, GQ, Esquire, Spin, The Guardian, The Believer, Billboard, The A.V. Club, and ESPN. Klosterman served as the Ethicist for The New York Times Magazine for three years, appeared as himself in the LCD Soundsystem documentary Shut Up and Play the Hits, and was an original founder of the website Grantland with Bill Simmons.