The Code Breaker: Jennifer Doudna, Gene Editing, and the Future of the Human Race (Paperback) 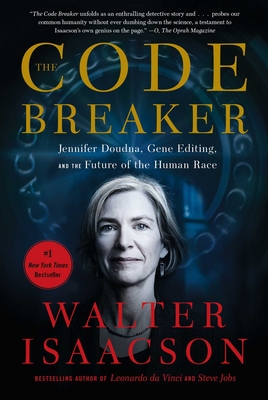 The Code Breaker: Jennifer Doudna, Gene Editing, and the Future of the Human Race (Paperback)


On Our Shelves Now
A Best Book of 2021 by Bloomberg BusinessWeek, Time, and The Washington Post

The bestselling author of Leonardo da Vinci and Steve Jobs returns with a “compelling” (The Washington Post) account of how Nobel Prize winner Jennifer Doudna and her colleagues launched a revolution that will allow us to cure diseases, fend off viruses, and have healthier babies.

When Jennifer Doudna was in sixth grade, she came home one day to find that her dad had left a paperback titled The Double Helix on her bed. She put it aside, thinking it was one of those detective tales she loved. When she read it on a rainy Saturday, she discovered she was right, in a way. As she sped through the pages, she became enthralled by the intense drama behind the competition to discover the code of life. Even though her high school counselor told her girls didn’t become scientists, she decided she would.

Driven by a passion to understand how nature works and to turn discoveries into inventions, she would help to make what the book’s author, James Watson, told her was the most important biological advance since his codiscovery of the structure of DNA. She and her collaborators turned a curiosity of nature into an invention that will transform the human race: an easy-to-use tool that can edit DNA. Known as CRISPR, it opened a brave new world of medical miracles and moral questions.

The development of CRISPR and the race to create vaccines for coronavirus will hasten our transition to the next great innovation revolution. The past half-century has been a digital age, based on the microchip, computer, and internet. Now we are entering a life-science revolution. Children who study digital coding will be joined by those who study genetic code.

Should we use our new evolution-hacking powers to make us less susceptible to viruses? What a wonderful boon that would be! And what about preventing depression? Hmmm…Should we allow parents, if they can afford it, to enhance the height or muscles or IQ of their kids?

After helping to discover CRISPR, Doudna became a leader in wrestling with these moral issues and, with her collaborator Emmanuelle Charpentier, won the Nobel Prize in 2020. Her story is an “enthralling detective story” (Oprah Daily) that involves the most profound wonders of nature, from the origins of life to the future of our species.
Walter Isaacson, a professor of history at Tulane, has been CEO of the Aspen Institute, chair of CNN, and editor of Time. He is the author of Leonardo da Vinci; The Innovators; Steve Jobs; Einstein: His Life and Universe; Benjamin Franklin: An American Life; and Kissinger: A Biography, and the coauthor of The Wise Men: Six Friends and the World They Made. Visit him at Isaacson.Tulane.edu.

“This year’s prize is about rewriting the code of life. These genetic scissors have taken the life sciences into a new epoch.” – Announcement of the 2020 Nobel Prize in Chemistry

"Isaacson’s vivid account is a page-turning detective story and an indelible portrait of a revolutionary thinker who, as an adolescent in Hawai’i, was told that girls don’t do science. Nevertheless, she persisted." — Oprah Magazine.com

"The Code Breaker marks the confluence of perfect writer, perfect subject and perfect timing. The result is almost certainly the most important book of the year.” – Minneapolis Star Tribune

“Isaacson captures the scientific process well, including the role of chance. The hard graft at the bench, the flashes of inspiration, the importance of conferences as cauldrons of creativity, the rivalry, sometimes friendly, sometimes less so, and the sense of common purpose are all conveyed in his narrative. The Code Breaker describes a dance to the music of time with these things as its steps, which began with Charles Darwin and Gregor Mendel and shows no sign of ending.” – The Economist

“Isaacson lays everything out with his usual lucid prose; it’s brisk and compelling and even funny throughout. You’ll walk away with a deeper understanding of both the science itself and how science gets done — including plenty of mischief.” – The Washington Post

"This story was always guaranteed to be a page-turner in [Isaacson's] hands." – The Guardian

"The Code Breaker unfolds as an enthralling detective story, crackling with ambition and feuds, laboratories and conferences, Nobel laureates and self-taught mavericks. The book probes our common humanity without ever dumbing down the science, a testament to Isaacson’s own genius on the page." — O Magazine

“Deftly written, conveying the history of CRISPR and also probing larger themes: the nature of discovery, the development of biotech, and the fine balance between competition and collaboration that drives many scientists.”— New York Review of Books

“The Code Breaker is in some respects a journal of our 2020 plague year.”— The New York Times

"Walter Isaacson is our Renaissance biographer, a writer of unusual range and depth who has plumbed lives of genius to illuminate fundamental truths about human nature. From Leonardo to Steve Jobs, from Benjamin Franklin to Albert Einstein, Isaacson has given us an unparalleled canon of work that chronicles how we have come to live the way we do. Now, in a magnificent, compelling, and wholly original book, he turns his attention to the next frontier: that of gene editing and the role science may play in reshaping the nature of life itself. This is an urgent, sober, accessible, and altogether brilliant achievement." —Jon Meacham

"When a great biographer combines his own fascination with science and a superb narrative style, the result is magic. This important and powerful work, written in the tradition of The Double Helix, allows us not only to follow the story of a brilliant and inspired scientist as she engages in a fierce competitive race, but to experience for ourselves the wonders of nature and the joys of discovery." —Doris Kearns Goodwin

“He’s done it again. The Code Breaker is another Walter Isaacson must-read. This time he has a heroine who will be for the ages; a worldwide cast of remarkable, fiercely competitive scientists; and a string of discoveries that will change our lives far more than the iPhone did. The tale is gripping. The implications mind-blowing.” – Atul Gawande

"An extraordinary book that delves into one of the most path-breaking biological technologies of our times and the creators who helped birth it. This brilliant book is absolutely necessary reading for our era."  — Siddhartha Mukherjee

“Now more than ever we should appreciate the beauty of nature and the importance of scientific research; This book and Jennifer Doudna’s career show how thrilling it can be to understand how life works.” —Sue Desmond-Hellmann

“An extraordinarily detailed and revealing account of scientific progress and competition that grants readers behind-the-scenes access to the scientific process, which the COVID-19 pandemic has taught us remains opaque to the wider public. It also provides lessons in science communication that go beyond the story itself.” – Science Magazine

“An indispensable guide to the brave… new world we have entered." – Pittsburgh Post-Gazette

"A vital book about the next big thing in science—and yet another top-notch biography from Isaacson." — Kirkus Reviews (starred review)

"In Isaacson's splendid saga of how big science really operates, curiosity and creativity, discovery and innovation, obsession and strong personalities, competitiveness and collaboration, and the beauty of nature all stand out." — Booklist (starred review)

"Isaacson depicts science at its most exhilarating in this lively biography of Jennifer Doudna, the winner of the 2020 Nobel Prize in medicine for her work on the CRISPR system of gene editing...The result is a gripping account of a great scientific advancement and of the dedicated scientists who realized it." — Publisher's Weekly (starred review)

"Isaacson, the Pulitzer Prize-winning author of best sellers Leonardo da Vinci and Steve Jobs, offers a startling, insightful look at this lifesaving, hugely significant scientific advancement and the brilliant Doudna, who wrestles with the serious moral questions that accompany her creation. Should this technology be offered to parents to tailor-make their babies into athletes or Einsteins? Who gets altered and saved and why?” — AARP

"A brilliant and engaging book. There are many quotable gems but I have chosen one sentence from the epilogue that epitomizes not only Doudna but also Isaacson himself, whose book title ends with a hortatory claim that CRISPR affects the future of the human race: 'To guide us, we will need not only scientists, but humanists. And most important, we will need people who feel comfortable in both words, like Jennifer Doudna.'" — Policy Magazine