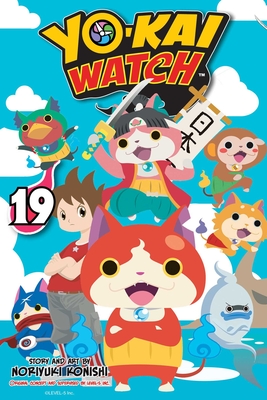 This is book number 19 in the Yo-kai Watch series.

The Demon Island arc resolves with a bang as Nate Adams and his mysterious new friend Chimpanyan travel to perilous Demon Island, where they plan to rescue the legendary Momoyan!
Noriyuki Konishi hails from Shimabara City in Nagasaki Prefecture, Japan. He debuted with E-CUFF in Monthly Shonen Jump Original in 1997. He is known in Japan for writing manga adaptations of AM Driver and Mushiking: King of the Beetles, along with Saiyuki Hiro Go-Kū Den!, Chōhenshin Gag Gaiden!! Card Warrior Kamen Riders, Go-Go-Go Saiyuki: Shin Gokūden and more. Konishi was the recipient of the 38th Kodansha manga award in 2014 and the 60th Shogakukan manga award in 2015.