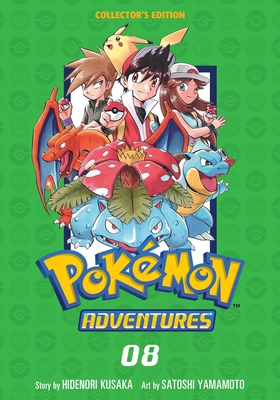 This is book number 8 in the Pokémon Adventures Collector’s Edition series.

A stylish omnibus edition of the best-selling Pokémon Adventures manga, collecting all the original volumes of the series you know and love.

The finale of the Ruby & Sapphire arc crescendos with a battle between Legendary Pokémon Kyogre and Groudon! And, in the new FireRed & LeafGreen arc, Green’s long-lost parents have been sucked into a vortex created by a mysterious Pokémon! Red and Blue want to help, but first they must improve their battle skills.

Collects the original Pokémon Adventures volumes 22, 23 & 24!
Hidenori Kusaka is the writer for VIZ Media’s Pokémon Adventures. Running continuously for over 20 years, Pokémon Adventures is the only manga series to completely cover all the Pokémon games and has become one of the most popular series of all time. Kusaka is currently working on the 14th story arc, Pokémon: Sun & Moon. In addition to writing manga, he also edits children’s books and plans mixed-media projects for Shogakukan’s children’s magazines. He uses the Pokémon Electrode as his author portrait.