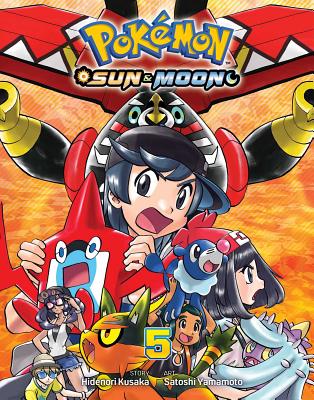 This is book number 5 in the Pokémon: Sun & Moon series.

The mysteries around shy refugee Lillie deepen. What is the connection between her Cosmog and that mysterious rift in the sky…? Meanwhile, as the trial captains search for Team Skull’s headquarters, a Pokémon attack capsizes Sun and Moon’s boat! Then, why would someone destroy…a supermarket?!

Will Sun earn the right to meet Tapu Bulu?
Hidenori Kusaka is the writer for VIZ Media’s Pokémon Adventures. Running continuously for over 20 years, Pokémon Adventures is the only manga series to completely cover all the Pokémon games and has become one of the most popular series of all time. Kusaka is currently working on the 14th story arc, Pokémon: Sun & Moon. In addition to writing manga, he also edits children’s books and plans mixed-media projects for Shogakukan’s children’s magazines. He uses the Pokémon Electrode as his author portrait.