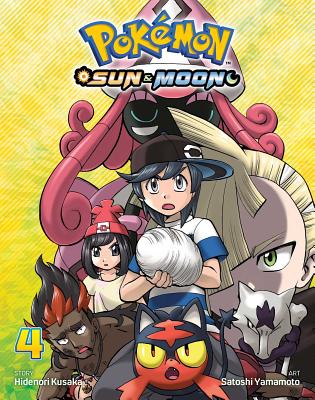 This is book number 4 in the Pokémon: Sun & Moon series.

Will Sun ever learn to master the Z-Move? Several obstacles stand in his way! Trial Captain Kiawe might be able to teach him, but first Sun and Moon have to rescue Kiawe from a Team Skull attack. Then Sun has to get his hands on a Z-Ring. And if he manages all that, he still has to prove his mettle to Island Guardian Tapu Lele!

And will Sun deliver his special order of berries?
Hidenori Kusaka is the writer for VIZ Media’s Pokémon Adventures. Running continuously for over 20 years, Pokémon Adventures is the only manga series to completely cover all the Pokémon games and has become one of the most popular series of all time. Kusaka is currently working on the 14th story arc, Pokémon: Sun & Moon. In addition to writing manga, he also edits children’s books and plans mixed-media projects for Shogakukan’s children’s magazines. He uses the Pokémon Electrode as his author portrait.