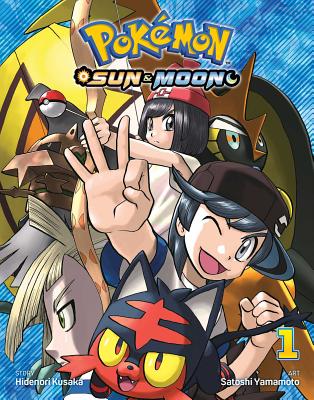 This is book number 1 in the Pokémon: Sun & Moon series.

Moon is on her way to deliver a rare Pokémon to Professor Kukui in the Alola region when she meets his good friend Sun, a courier entrusted with a special Pokédex. Sun offers to safely deliver Moon to the professor’s lab… But then they tangle with a group of grunts from Team Skull and are attacked by a mysterious Pokémon!

What is this sparkling stone the mysterious Pokémon leaves behind…?
Hidenori Kusaka is the writer for VIZ Media’s Pokémon Adventures. Running continuously for over 20 years, Pokémon Adventures is the only manga series to completely cover all the Pokémon games and has become one of the most popular series of all time. Kusaka is currently working on the 14th story arc, Pokémon: Sun & Moon. In addition to writing manga, he also edits children’s books and plans mixed-media projects for Shogakukan’s children’s magazines. He uses the Pokémon Electrode as his author portrait.