A Miracle of Their Own: A Team, A Stunning Gold Medal and Newfound Dreams for American Girls (Hardcover) 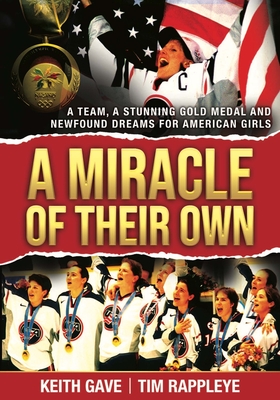 A Miracle of Their Own: A Team, A Stunning Gold Medal and Newfound Dreams for American Girls (Hardcover)


On Our Shelves Now
Like the group of players who stunned the world by upsetting the mighty Soviet Union in the iconic “Miracle Game” at the Winter Olympics in Lake Placid in 1980, few gave the Team USA women much of a chance to beat the Canadians in the inaugural women’s tournament in Nagano, Japan in 1998. After all, Canada’s women had dominated their game for decades, winning every major international tournament until then. But when the Gold Medal game had ended, Team USA was standing atop of the podium after a shocking upset that ignited what many consider to be the greatest rivalry in all of sports.
Keith Gave is the author of the best-selling book The Russian Five (2018 Gold Star Publishing), and writer/producer of the award-winning documentary of the same name. He has covered hockey for more than 40 years, including as the NHL beat writer for the Detroit Free Press and Dallas Morning News. Tim Rappleye's other books include Jack Parker’s Wiseguys (2017 University Press of New England) and Hobey Baker, Upon Further Review (2018 Mission Point Press). He currently writes columns on college hockey for FloHockey.TV. Tim played NCAA hockey at Lake Forest College, and now officiates youth hockey in Northern Michigan. He resides in Traverse City with his wife Amy and their two dogs.
Author Mitch Albom on The Russian Five: "Keith Gave, always a terrific reporter, had a front-row seat to the most fascinating and colorful chapter of Red Wings history -- the Russian Five. At times, he was smack in the middle of it, as an envoy, Russian speaker and secret-keeper. No one could write this story with the detail, depth and understanding that Gave delivers. The result is a whirlwind story that is at times fantastical, gripping, emotional and even humorous. This book was a long time in the making, but well worth the wait."

Hall of Fame hockey player Bobby Orr, on Jack Parker's Wiseguys: "The city of Boston in the 1970s was the hub of the hockey world. The Bruins were hot and so was the college game throughout New England. Jack Parker's Wiseguys tells the story of some of the best college players of that era as well as that of their legendary coach. A terrific read for fans and players familiar with that rough-and-tumble hockey vintage."

'Miracle on Ice' team member Jack O'Callahan, on Hobey Baker, Upon Further Review: "Tim Rappleye delivers a deep and thoughtful look into the life and times of one of America's greatest sportsmen who happened to also be one of the greatest of all American hockey players. I thoroughly enjoyed immersing myself in the 'way too short' life of the amazing Hobey Baker."