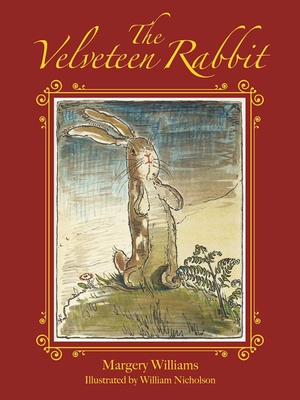 — Kirstyn
Originally published in 1922, The Velveteen Rabbit has delighted young readers for nearly a century. The story follows a young boy who’s given a stuffed rabbit as a Christmas gift. After the rabbit befriends other nursery toys, he comes to the realization that he wants to become a real rabbit. Eventually, the boy becomes ill and is relocated; his room is then disinfected and all the boy’s toys are thrown out, including the velveteen rabbit. The rabbit sheds a real tear causing a fairy to appear and turn him into a real rabbit.

In 2007, the book was named one of “Teachers’ Top 100 Books for Children” by the National Education Association. This elegant, affordable edition includes beautiful, full-color illustrations throughout the book from the original illustrator, William Nicholson. Each image accompanies the text to enhance young readers’ experience and immerse them in this captivating story.

Reprinted hundreds of times since its initial publication, The Velveteen Rabbit is a timeless children’s classic lets young readers experience the true magic of friendship, love, and being honest with oneself.
Margery Williams was born in July of 1882. She was an English-American author of numerous novels and children’s books, most notably The Velveteen Rabbit. She is also the author of The Little Wooden Doll, The Skin Horse, as well as many other highly regarded children’s works. She passed away in 1944, just before the end of World War II.

Sir William Nicholson was a renowned English illustrator and artist, who both supplied illustrations for children’s literature as well as wrote it himself. In addition to providing the illustrations for The Velveteen Rabbit, he authored two children’s books entitled Clever Bill and The Pirate Twins. Nicholson also worked in other areas of design, including theater set design; he designed the original set for Peter Pan in 1904. In the 1928 Summer Olympics, Nicholson was awarded a gold medal for his graphic work in the Arts competitions. He passed away in May of 1949.