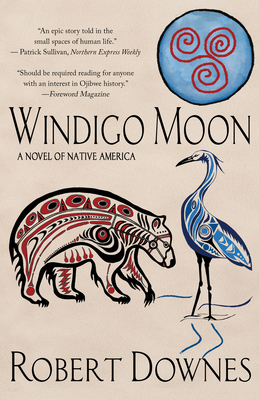 The great love of Blue Heron and Red Bear sustain an Ojibwe clan as it struggles to survive war, famine, and the coming of foreign explorers bearing deadly diseases.

The blood feud between two rival warriors over the love of Ashagi, a strong-willed woman of great beauty and greater determination threads through this story of one Ojibwe clan on the cusp of great change. A young woman from a peaceful village, Ashagi (Blue Heron) is abducted in a raid conducted by the Sioux, the ancestral enemies of her clan, and made a concubine of a fat, slovenly chief who already has two wives. When she is rescued by Misko (Red Bear), an Ojibwe youth, the two fall in love and a lifelong bond is formed. But Nika, Misko’s rival, demands that Misko surrender Ashagi to replace his brother who was killed during a raid involving the young warriors’ two clans. As Nika’s pride and obsession with Ashagi eats away at his sanity, greater danger for the whole Ojibwe way of life creeps ever closer.

Warfare, vengeance, supernatural monsters, and strange spirits all claw at the edges of this love triangle, but the power of the clan and the love of family and tradition helps sustain a culture on the verge of harrowing times. Beginning in 1588 and spanning twenty-five years, WINDIGO MOON encompasses warring tribes of the Upper Great Lakes, the onset of the Little Ice Age of the 1600s, the diseases introduced by foreign explorers, and, always and forever, the great love of Blue Heron and Red Bear.

Robert Downes has been a respected journalist and historian for over 30 years. In 1991 he co-founded the Northern Express Weekly in Traverse City, Michigan, which grew into the region’s largest weekly newspaper. He sold his stake in the company in 2013. He is the author of three books on biking and travel, and frequently appears in the media to speak on travel and history.

“We truly enjoyed this beautiful historical novel about the Ojibwa Indians. Essentially a love story, the characters are well-drawn and the landscape lives and breathes. Don’t miss this one!” — W. Michael Gear and Kathleen O’Neal Gear, New York Times bestselling authors of Moon Hunt

“Fascinating . . . a novel that keeps you riveted and stays with you.” — New York Times bestselling author Hannah Howell

“A complicated story that tells the larger story of the last days of the Native People before Europeans arrived ... a gripping, exciting narrative of a tribe of people and their struggle over generations. It is truly an epic story told in the small spaces of human life.” — Patrick Sullivan, Northern Express Weekly

“Should be required reading for anyone with an interest in Ojibwe history.” — Foreword magazine

"In a tale filled with drama, danger and warfare, Downes manages to weave a complex and touching narrative that exemplifies many of the deep cultural values of the Ojibwe people, approaching these values on their own terms to create a story of great empathic power. The novel is also imbued with a sense of magical realism and features many of the supernatural beings and monsters of the Ojibwe. It also paints a vivid picture of many of the struggles of life in Native America, including diseases such as measles, viral hepatitis and smallpox which wiped out dozens of civilizations by the time the first colonists arrived." — Kyla Valenti, The Load (www.mtulode.com)