Who Said That?: A game of quotes 430 cards (Novelty book) 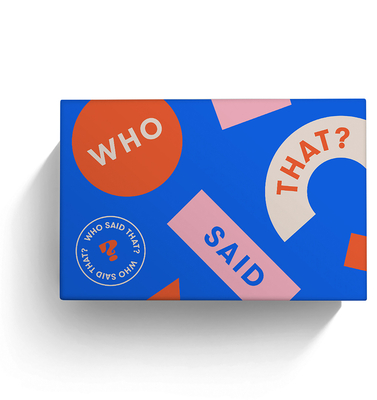 Who Said That?: A game of quotes 430 cards (Novelty book)


On Our Shelves Now
Match inspiration, amusing and simply flabbergasting quotes with their icon, in this fun game you can play from anywhere!

This multiple-choice card game is designed for history and pop-culture obsessives, as they battle to match quotes with the person who uttered (or penned) them. Packaged as cards in a deck, this game can be played anywhere you’d like—so long as you’re not shouting your answers at full volume in the library.

An example: “A zebra does not change its spots”. Players must decide if this was said by A) George W Bush, B) Al Gore, or, C) Dick Cheney. Then, flip the card over and find out who’s right. With 2–infinite players, collect points until you reach the end when the person with the best memory wins!

This game will test your general knowledge, and along the way you’ll uncover some of the best gaffes that modern history has to offer.
This game was collated by the editorial staff at Smith Street Books, who were both inspired and shocked as they sifted through some of history's best (and weirdest) quotes.