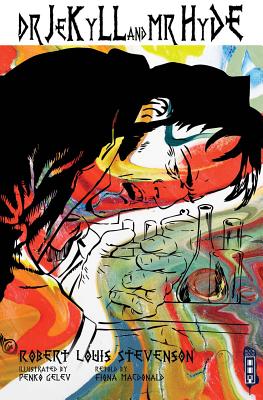 
Special Order
Robert Louis Stevenson's classic tale of good and evil is now vividly illustrated and faithfully retold in graphic-novel form
In the murky streets of Victorian London, a vicious killer is on the prowl. Who is the mysterious and devilish Mr. Hyde? And why is Henry Jekyll, a respected doctor, protecting him? What could these two men have in common? Stevenson's chilling story of human nature and an experiment that goes terribly wrong comes to life in this graphic-novel format. In addition to the novel, this edition includes a biography of Robert Louis Stevenson, a history of his writing of the original story, a listing of Dr. Jekyll and Mr. Hyde performances, and footnotes to explain difficult words and ideas.
Fiona Macdonald studied history at Cambridge University and at the University of East Anglia in England. She has taught in schools and colleges and has written numerous books for children, including others in the Graffex series. Penko Gelev graduated from the National Art School in Sofia, Bulgaria. He is a film and children's television producer, and also finds time to draw comics and illustrations.