How to Be Perfect: The Correct Answer to Every Moral Question (CD-Audio) 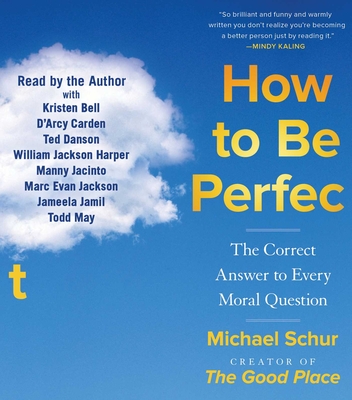 How to Be Perfect: The Correct Answer to Every Moral Question (CD-Audio)

In a world full of complicated decisions, where every choice we make affects something or someone, how do we ever figure out if the decisions we make are inherently good or bad? And how the heck do we figure out if we’re actually as good (or bad) of a person as we think we are?
Along with being the co-writer behind Parks and Rec and The Office, Michael Shur is the writer behind NBC’s The Good Place – a comedy show about a woman who ends up in heaven by mistake. This book was born from the years of research that went into writing The Good Place, which explored moral and ethical dilemmas through four seasons of brilliant characters and hilarious dialogue (can you tell it’s one of my favorites?).
So obviously, when I saw this book was coming out, I absolutely had to read it. But even better – I listened to it on Libro! And along with being read by the author, the actors from the show read many of the footnotes and acted out hypothetical situations (and there were a lot of them). This just made the experience of the book so much better. But regardless of whether you have seen the show or not, I feel like this book has to be a must-read for everyone.
The reader and writer in me is just reeling at the task Shur took on: reading convoluted and complex works of moral philosophy like Aristotle and Kant, and boiling the concepts down to something everyone can understand while simultaneously calling out their faults and acknowledging biases (including his own). He recognizes that “good decisions” are often expensive or time consuming, and it’s often a privilege to even have the option to make a “good” decision. I won’t give any spoilers, but rest assured, this book taught me that “being a good person,” while intimidating, might not be so hard after all.

— Leah
From the creator of The Good Place and the cocreator of Parks and Recreation, a hilarious, thought-provoking guide to living an ethical life, drawing on 2,500 years of deep thinking from around the world. Read by the author, this one-of-a-kind audio production features guest appearances by members of the cast of The Good Place.

Most people think of themselves as “good", but it’s not always easy to determine what’s “good” or “bad”—especially in a world filled with complicated choices and pitfalls and booby traps and bad advice. Fortunately, many smart philosophers have been pondering this conundrum for millennia and they have guidance for us. With bright wit and deep insight, How to Be Perfect explains concepts like deontology, utilitarianism, existentialism, ubuntu, and more, so we can sound cool at parties and become better people.

Schur starts off with easy ethical questions like “Should I punch my friend in the face for no reason?” (No.) and works his way up to the most complex moral issues we all face. Such as: Can I still enjoy great art if it was created by terrible people? How much money should I give to charity? Why bother being good at all when there are no consequences for being bad? And much more. By the time the book is done, we’ll know exactly how to act in every conceivable situation, so as to produce a verifiably maximal amount of moral good. We will be perfect, and all our friends will be jealous. Okay, not quite. Instead, we’ll gain fresh, funny, inspiring wisdom on the toughest issues we face every day.

How to Be Perfect is narrated by Michael Schur, Kristen Bell, D’Arcy Carden, Ted Danson, William Jackson Harper, Manny Jacinto, Marc Evan Jackson, Jameela Jamil, and Todd May!
Michael Schur is a television writer and producer who has worked on shows like The Office, Master of None, The Comeback, and Hacks, and created or cocreated Parks and Recreation, Brooklyn 99, The Good Place, and Rutherford Falls. He lives in Los Angeles with his wife Jennifer, and their two kids, William and Ivy.

Michael Schur is a television writer and producer who has worked on shows like The Office, Master of None, The Comeback, and Hacks, and created or cocreated Parks and Recreation, Brooklyn 99, The Good Place, and Rutherford Falls. He lives in Los Angeles with his wife Jennifer, and their two kids, William and Ivy.

"Michael Schur and the cast of "The Good Place" once again collaborate, this time to ponder today’s toughest moral questions using philosophical views from the East and West. Schur delivers hilarious sarcasm as he tackles ethics and explains how to balance morality and achieve virtue. Friendly and inviting sounding, he is able to take the difficult, oftentimes dry topic of philosophy and make it engaging and entertaining. Using a simple and steady pace, Schur's narration is coupled with signature voices from the show, including Ted Danson and Kristen Bell. The entire cast makes this production an intriguing and funny way to introduce or reintroduce oneself to philosophy and achieve goodness."
— Winner of an AudioFile Earphones Award, AudioFile Magazine