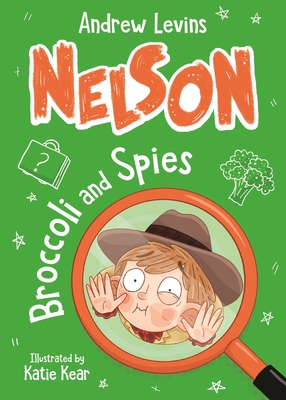 This is book number 2 in the Nelson series.

The second book in the totally outrageous adventures of Nelson Hunter—the boy who hates vegetables. Featuring a serious spy mystery and an epic broccoli-fueled battle!

After Nelson discovers his nemesis—vegetables—are actually the key to his superpowers, he's determined to learn the truth about his family's secret. But Nelson has other questions too. Like what is the mysterious flying machine at his grandparents' farm? And will he really have to eat broccoli to save the day? Yuck!

Andrew Levins has been a DJ since he was a teenager, and a food writer for almost as long. He cut his teeth as one of the inaugural DJs on FBi radio, plays most major Australian music festivals and hosts the longest-running hip-hop night in Sydney. His articles have been published by the Sydney Morning Herald, ABC Life, VICE, SBS, The Good Food Guide, and Time Out. In 2007 he co-founded the youth music charity Heaps Decent (with Diplo and Nina Las Vegas), and in 2009 he was named one of Sydney’s 100 Most Influential People by the Sydney Morning Herald. Since then he’s run a successful restaurant, released a cookbook, and started no less than five podcasts. The Nelson series are his first books for children. Katie Kear is a British illustrator and has been creating artwork for as long as she can remember.