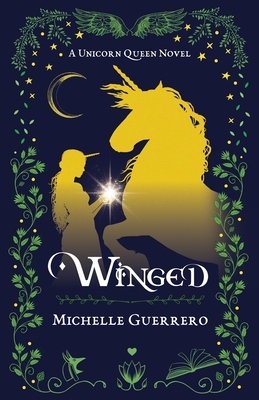 Winged launches the legend of the unicorn into a modern-day, twisted tale of vengeful gods, unrequited love, and soulmates gone wrong.

Seventeen-year-old Tessa O'Sullivan has no idea magic exists. She figures she's having a rough year plagued with black-outs, memory loss, and sleep deprivation. She doesn't know her true self is bound in human form because the ancients punished her for defying them or that she ticked off a god who's bent on destroying her.

When Tessa's family disappears, she's thrust into a world of magic and deadly curses with two boys. Musician Cyrus Burns may be her soulmate, or a thief sent to destroy her with a kiss. And Cyrus's enemy Edric is a family friend, who also happens to be a powerful Elven King. He's Tessa's former lover from a past life and wants to keep her safe, even at the expense of her freedom.

Trusting either of them is impossible when they're both keeping dangerous secrets. If Tessa doesn't save her family, they'll be lost forever, and she'll be pulled, hooves kicking, into the underworld for all eternity. She's about to learn as an immortal unicorn queen, there are some fates worse than death.