The Game Console 2.0: A Photographic History from Atari to Xbox (Hardcover) 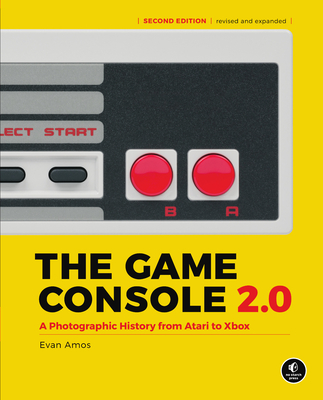 The Game Console 2.0: A Photographic History from Atari to Xbox (Hardcover)


On Our Shelves Now
This revised and expanded second edition of the bestselling The Game Console contains brand new content, with coverage of 50 more consoles, variants, and accessories in 50 added pages. The Game Console 2.0 is a gorgeous coffee table book for geeks and gamers that brings together highly detailed photos of more than 100 video game consoles and their electronic interiors spanning nearly five decades.

Revised and updated since the first edition’s celebrated 2018 release, The Game Console 2.0 is an even bigger archival collection of vividly detailed photos of more than 100 video-game consoles. This ultimate archive of gaming history spans five decades and nine distinct generations, chronologically covering everything from market leaders to outright failures, and tracing the gaming industry’s rise, fall, and monumental resurgence.

The book’s 2nd edition features more classic game consoles and computers, a section on retro gaming in the modern era, and dozens of new entries — including super-rare finds, such the Unisonic Champion 2711, and the latest ninth-generation consoles. You’ll find coverage of legendary systems like the Magnavox Odyssey, Atari 2600, NES, and the Commodore 64; systems from the ‘90s and 2000s; modern consoles like the Nintendo Switch, Xbox Series X|S, and PlayStation 5; and consoles you never knew existed.

Get a unique peek at the hardware powering the world’s most iconic video-game systems with The Game Console 2.0 — the perfect gift for geeks of all stripes and every gamer’s must-have coffee-table book.

Evan Amos is a video game photographer and historian, whose contributions to the publicdomain comprise the ultimate visual reference for every generation of consoles. His work has appeared in hundreds of articles, YouTube videos, and popular media outlets like Kotaku. He is also the creator and curator of the Vanamo Online Game Museum, home to the most accessible, widely used digital preservation archive in the video game realm.
"The Game Console 2.0 is one of the rare video game books that we recommend for any fan of the medium, regardless of which systems they play now, or had as a kid. Evan Amos breaks down the hardware of 100 consoles spanning several decades, giving readers a literal inside look at the components that make the system work."
—Brandt Ranj, Rolling Stone

"The Game Console 2.0 is a must-have, even if you already have the first edition. It is a video game enthusiast’s heaven and makes for a perfect coffee table book!"
—Julia Roth, Geek Girl Authority

"[The Game Console 2.0] is a perfect end table book catered toward nerds and gamers that unites profoundly nitty gritty photographs of in excess of 100 computer game control centers and their electronic insides."
—Gifts For Gamers To Buy In This Season, RecaBlog

"[The Game Console 2.0] has been heavily revised and expanded . . . This new version adds a lot more content over the first edition!"
—Madlittlepixel, YouTuber

"[Evan Amos] is extremely improtant to the retro gaming community . . . [The Game Console 2.0] works as a visual encyclopedia of 40 plus years of gaming. He's added stuff that he didn't have before, but I'm telling you, this is such a great book."
—MetalJesusRocks, YouTuber

"[The Game Console 2.0] is an extraordinary journey through the history of video game hardware."
—Daniel New, Editor, Thumbsticks

REVIEWS FOR THE FIRST EDITION OF THE GAME CONSOLE:

"This book gathers gorgeous images into a visual history of games, and it’s such a nostalgic treat to pore over."
—Keith Stuart, The Guardian, 1 of 20 Books Every Video Gamer should Read

"Amos’ passion for gaming and photographic skills come together beautifully in The Game Console."
—Kotaku

"While services like PlayStation Now prove that streaming has the potential to increase access to older hardware-bound games, The Game Console posits that consoles themselves are important cultural objects that we shouldn’t forget."
—Motherboard

"A perfect choice for gamers looking to build up their knowledge on video game history."
—Android Central

"Photographed in intense, loving detail, the book quite literally unpacks 86 consoles and examines their innards."
—Mashable

"It's clear that photo-documenting these products is the heart and soul of The Game Console."
—Game Vortex

"This image-rich guide brings gamers on a guided tour exploring the legendary consoles of yesteryear."
—Sian Babish, The Chicago Tribune

"The Game Console might just be the most complete catalog of game consoles ever published."
—Warped Zone

"Evan Amos does a fantastic job of capturing the nostalgia of every console."
—BioGamer Girl

"A vibrant, 264-page book that's packed cover to cover with full-color photos of video game consoles. Spanning consoles like the Atari 2600, Nintendo Entertainment System, to modern-day ones like the PlayStation 4, it'll take you on a nostalgic trip and make you appreciate the history of your favorite consoles."
—Brandon Carte, Yahoo Life