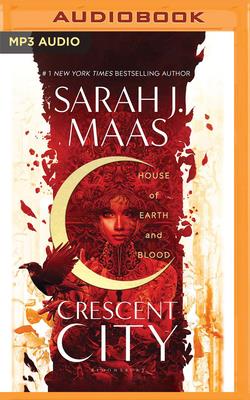 Sarah J. Maas has been ruling the world of YA fantasy for awhile now and recently made the jump into adult fantasy with her Crescent City series. House of Earth and Blood is the first installment in the series, and there is a huge amount of world-building involved in this novel as it sets the stage for not just the characters and Crescent City itself, but for the entire universe Maas has built at large. We are dealing with several major cities, countless species living in these cities, and the hierarchy of each of these species and how they operate under the ruling class of the Asteri (angels that have god-like powers). The story follows Bryce, a half-human, half-fae hybrid who lives in Crescent City as a post-undergrad just trying to figure out her next steps. Her biggest concern is what her Friday night plans will bring until the city she lives in is ripped apart by a demon that literally pulps its victims. That's a sure way to ruin anyone's Friday night. In a city that has a myriad of dangers for anyone with mortal blood (partial or full), Bryce finds herself in the middle of this crisis when the minor angels investigating turn to her to help catch this monster and put a stop to these grizzly murders. This is a true high fantasy read with a murder mystery, a slow-burn romance, and a lot of character and 'bigger picture' development. It's an extremely fun start to this series and if you are a longtime fan of Maas or you've never touched one of her books before but adore fantasy you definitely need to hop on this train.

Number one New York Times best-selling author Sarah J. Maas launches her brand-new CRESCENT CITY series with House of Earth and Blood the story of half-Fae and half-human Bryce Quinlan as she seeks revenge in a contemporary fantasy world of magic, danger, and searing romance.

Bryce Quinlan had the perfect life-working hard all day and partying all night - until a demon murdered her closest friends, leaving her bereft, wounded, and alone. When the accused is behind bars but the crimes start up again, Bryce finds herself at the heart of the investigation. She'll do whatever it takes to avenge their deaths.

Hunt Athalar is a notorious Fallen angel, now enslaved to the Archangels he once attempted to overthrow. His brutal skills and incredible strength have been set to one purpose - to assassinate his boss' enemies, no questions asked. But with a demon wreaking havoc in the city, he's offered an irresistible deal: help Bryce find the murderer, and his freedom will be within reach.

As Bryce and Hunt dig deep into Crescent City's underbelly, they discover a dark power that threatens everything and everyone they hold dear, and they find, in each other, a blazing passion - one that could set them both free, if they'd only let it.

With unforgettable characters, sizzling romance, and pause-resisting suspense, this richly inventive new fantasy series by number one New York Times best-selling author Sarah J. Maas delves into the heartache of loss, the price of freedom - and the power of love.