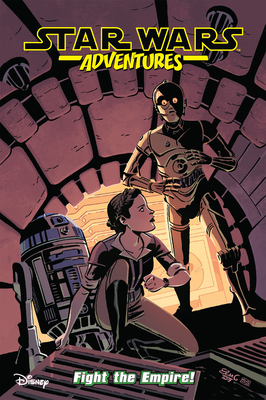 This is book number 9 in the Star Wars Adventures series.

Join Han, Luke, Princess Leia, Lando Calrissian, and Chewbacca in these middle-grade-friendly adventures that take place during the original trilogy!

Not ones to rest on their laurels, Han and Luke embark on a mission to secure equipment for the fledgling rebellion in a thrilling story set just after A New Hope! Then, after losing the man she loves to a bounty hunter, Princess Leia embarks on a dangerous mission with R2-D2 and C-3PO in an exciting tale set just after The Empire Strikes Back! And finally, join Lando Calrissian and Chewbacca aboard the Millennium Falcon for another rollicking mission on behalf of the Rebel Alliance!

Cavan Scott is a writer whose credits include novels, comic books, children's activity books, audio plays, and short stories. He has worked on a large number of high-profile comic series including Doctor Who, Star Wars, Pacific Rim, Skylanders, Adventure Time, Pathfinder, Angry Birds, Judge Dredd, and Warhammer 40,000. His second Sherlock Holmes novel, Cry of the Innocents, was published in 2017.