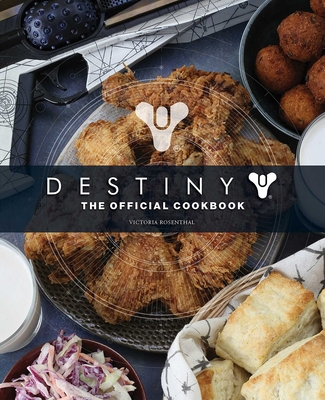 Based on Bungie’s acclaimed video game series Destiny, this official cookbook is filled with recipes inspired by the Guardians and locations seen throughout the game’s expansive universe.

Eva Levante has traveled around the world after the events of the Red War, gathering a variety of recipes after crossing paths with many Guardians along the way and learning from their adventures. Craft, mouthwatering food from her diverse list of recipes inspired by the game’s unique world, plus step-by-step instructions and full-color photos, help guide and inspire fans to go on their own culinary adventure through the solar system.

Perfect for all Hunters, Titans, and Warlocks, Destiny: The Official Cookbook is packed with amazing recipes and stories that celebrate Destiny’s vast multiplayer universe.
Victoria Rosenthal launched her blog, Pixelated Provisions, in 2012 to combine her lifelong passions for video games and food by recreating consumables found in many of her favorite games. When she isn't experimenting in the kitchen and dreaming up new recipes, she spends her days developing graphics for NASA. She resides in Houston, Texas, with her husband and corgi. Victoria is also the author of Fallout: The Vault Dweller's Official Cookbook, Destiny: The Official Cookbook, and Street Fighter: The Official Street Food Cookbook.