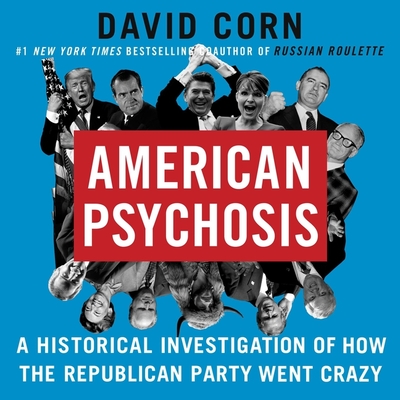 #1 New York Times bestselling author and investigative reporter David Corn tells the wild and crazy story of the Republican Party's decades-long relationship with far-right extremism, bigotry and paranoia.A fast-paced, rollicking account of how the GOP since the 1950s has constantly encouraged and exploited extremism and paranoia to gain power, AMERICAN PSYCHOSIS offers readers a brisk, can-you-believe-it journey through the netherworld of far-right irrationality and the Republican Party's interactions with the darkest forces of America--which culminated in Donald Trump's triumph. It tells the hidden history of how the Party of Lincoln forged alliances with extremists, kooks, racists, and conspiracy-mongers and fueled fear, anger, and resentment to win elections--and how this led to the GOP becoming a Trump personality cult that bolsters the most bizarre and craziest excesses of the right.The Trump-incited insurrectionist attack on the Capitol on January 6, 2021, was no aberration. AMERICAN PSYCHOSIS shows it was a continuation of a long and deep-rooted tradition of the GOP: fostering and capitalizing on derangement on the right. AMERICAN PSYCHOSIS entertains and enlightens even as it presents a horrific tale of American politics gone wrong.The story told in AMERICAN PSYCHOSIS covers the last seven decades. From McCarthyism to the Birchers to segregationists to the New Right to the religious right to Rush Limbaugh to Newt Gingrich to the militia movement to Fox News to the Tea Party to Donald Trump, the Republican Party has deliberately nurtured and exploited rightwing fear and loathing dangerously fueled by conspiracy theories and political paranoia. This powerful and important account explains how the worst forces in American politics have come to poison the nation's discourse.