The Justice of Kings (Compact Disc) 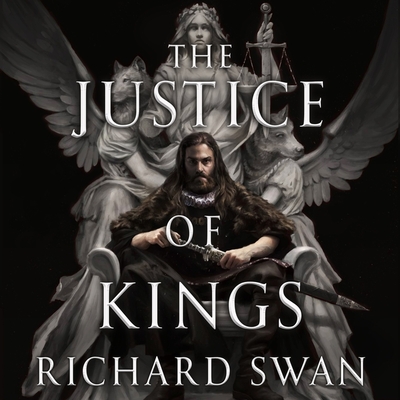 The Justice of Kings (Compact Disc)

The King is a busy man, trying to serve the whole kingdom. But it is very hard to keep track of all the little towns and villages outside the capital's walls. Enter the King's Justice. A Justice resembles a tax-collector, traveling to the far reaches of the kingdom, making sure the King's laws (instead of taxes) are being upheld. A Justice has full authority and acts as judge, jury, and even executioner - all rolled into one. This is the story of Justice Sir Konrad Vonvalt and the murder of a Highborn woman in a small town on the outskirts of the Kingdom. While he is away there is treason in the capital, and the King is in danger.
Unlike the typical fantasy book, there is very little magic in the world of The Justice of Kings, but what it lacks in magic it makes up tenfold in worldbuilding and character development. Can Sir Konrad find who murdered the woman in time to make it back and help his King? Could the murder be a plot to keep the Justice away from the capital?
This debut from Richard Swan is the ideal book for someone who loves fantasy, mystery, and adventure. This stunner is already a contender for my favorite book of 2022. Pair it with Age of Ash to start the year off perfectly.

— Zach
The first book in a fantasy trilogy where action, intrigue and magic collide, The Justice of Kings introduces an unforgettable protagonist destined to become a fantasy icon: Sir Konrad Vonvalt, an Emperor's Justice, who is a detective, judge and executioner all in one. But these are dangerous times to be a Justice . . .No man is above the law. The Empire of the Wolf simmers with unrest, rife with rebels, heretics and powerful patricians who would challenge the power of the imperial throne. Only the Order of Justices stands in the way of chaos. Sir Konrad Vonvalt is the most feared Justice of all, upholding the law by way of his sharp mind, arcane powers and skill as a swordsman. In this he is aided by Helena Sedanka, his clerk and prot g , orphaned by the wars that forged the empire. When the pair investigate the murder of a provincial aristocrat, they unearth a conspiracy that stretches to the very top of Imperial society. As the stakes rise and become ever more personal, Vonvalt must make a choice: will he abandon the laws he's sworn to uphold in order to protect the empire?