Nicnevin and the Bloody Queen (Paperback) 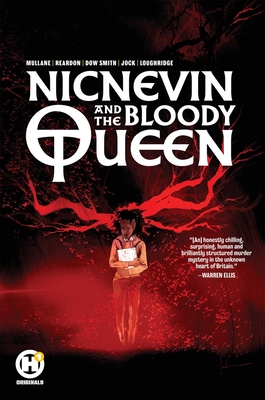 Nicnevin and the Bloody Queen (Paperback)


Usually Ships in 1-5 Days
Folk horror through the eyes of a modern teen in this atmospheric tale of obsession, suspense and magic.

Something strange has been unleashed in the north of England. A modern-day druid commits a series of ghastly murders in an attempt to unleash the awesome power of the ancient gods of Great Britain. But all hell really breaks loose when his latest would-be victim, Nicnevin “NISSY” Oswald, turns out to be more than she seems.

A British tale mixing black magic and horror, godfathered by Jock, one of the new masters of comic book suspense!
Helen Mullane began her career in film distribution, managing the release of titles for the likes of Studio Canal and EOne. Later she produced the feature documentary FUTURESHOCK! THE STORY OF 2000AD and various shorts such as the multi-award-winning NASTY. Helen currently resides in northern Sweden where she balances writing and producing with sled dog training and racing.

Dom Reardon is an illustrator from the U.K. He is best known for his work in the anthology comic 2000 AD where he co-created the series Caballitics Inc. with writer Gordon Rennie and The Grievous Journey of Ichabod Azrael with writer Rob Williams. He has also worked for Dark Horse, Walker Books and Wizards of the Coast among others.

Matthew Dow Smith is a writer and comic book artist who has worked for nearly every major American comic book publisher. His art has appeared in Mike Mignola’s Hellboy, Dark Horse Comics’s Bad Luck Chuck, Aftershock’s Dead Kings, DC’s Suicide Squad: Hell to Play, and many others. He is also the writer/artist of the upcoming The October Girl graphic novel series.
"A disturbing coming-of-age horror story perfect for these complicated digital age times."
— SYFY WIRE

"A fantastic gothic horror, fairytale-esque story that draws in readers with an unnerving art style and a narrative that keeps you turning the pages."
— WICKED HORROR

"Mullane’s debut graphic novel carefully walks the line between realism and folk horror in a way that only the best horror stories do."
— HORROR NEWS NETWORK

"A quintessentially English horror story with a powerful concoction of influences."
— GROVEL

“Engaging and provocative in a way we haven't seen before."
— Alan Jones

"This is a masterpiece."
— Alex Paknadel (FRIENDO)

"A bewitching blend of British folk horror and coming-of-age yarn that had me racing through its pages, desperate to see what happened next. Nicnevin is a heroine for our times."
— Anne Billson

“A moody slice of folk horror that peels away the skin of modern Britain to reveal its wild and bloody heart.”
— Andy Diggle (LOSERS)

“Eerie yet cathartic. Strange yet graceful. Novel yet wistful…. [It] marks Helen Mullane as a much needed, passionate new voice in horror/weird fiction.”
— Lonnie Nadler (THE DREGS)

"Anyone whose read Neil Gaiman’s novels can appreciate the style… It’s an impressive work.”
— PULLBOX