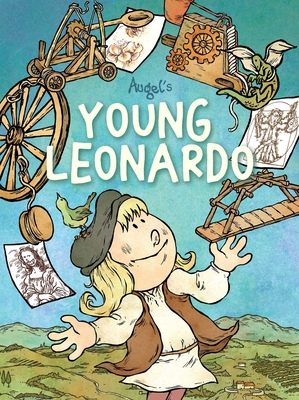 
Usually Ships in 1-5 Days
Have you ever wondered what the great masters of the High Renaissance were like when they were young? Learn and explore through the eyes of one the world's greatest artists and thinkers: Leonardo da Vinci!

Meet Leonardo, a curious little boy whose comical adventures examine the inner and outer workings of the world around him. As an adult, Leonardo will produce some of the world's greatest masterpieces and usher in the Renaissance, but as a child, he’s simply precocious, brilliant, meddlesome, exasperating...and unbelievably entertaining.

Young Leonardo is a charming tale full of hysterical vignettes showcasing the budding imagination of one of history’s most brilliant thinkers.
William Augel was born in Le Mans. A draftsman and independent illustrator, he wrote several books oriented toward the youth, and works regularly for magazines such as, "La Salamandre". In 2011, he was published in l'Oeuf Atomes Crochus and, in 2012, he published Monstrueuse Cathy with Jarjille. In 2016, still with Jarjille, he released Zoostrip and Pinard mon nectar and the following year, Young Mozart (Le Petit Mozart) with La Boîte à bulles.