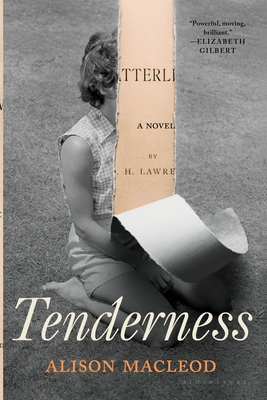 "Powerful, moving, brilliant . . . an utterly captivating read, and I came away from it with this astonished thought: There's nothing this writer can't do." --Elizabeth Gilbert

For readers of A Gentleman in Moscow and Z: A Novel of Zelda Fitzgerald, an ambitious, spellbinding historical novel about sensuality, censorship, and the novel that set off the sexual revolution.

On the glittering shores of the Mediterranean in 1928, a dying author in exile races to complete his final novel. Lady Chatterley's Lover is a sexually bold love story, a searing indictment of class distinctions, and a study in sensuality. But the author, D.H. Lawrence, knows it will be censored. He publishes it privately, loses his copies to customs, and dies bereft.

Booker Prize-longlisted author Alison MacLeod brilliantly recreates the novel's origins and boldly imagines its journey to freedom through the story of Jackie Kennedy, who was known to be an admirer. In MacLeod's telling, Jackie-in her last days before becoming First Lady-learns that publishers are trying to bring D.H. Lawrence's long-censored novel to American and British readers in its full form. The U.S. government has responded by targeting the postal service for distributing obscene material. Enjoying what anonymity she has left, determined to honor a novel she loves, Jackie attends the hearing incognito. But there she is quickly recognized, and FBI Director J. Edgar Hoover takes note of her interest and her outrage.

Through the story of Lawrence's writing of Lady Chatterley's Lover, the historic obscenity trial that sought to suppress it in the United Kingdom, and the men and women who fought for its worldwide publication, Alison MacLeod captures the epic sweep of the twentieth century from war and censorship to sensuality and freedom. Exquisite, evocative, and grounded in history, Tenderness is a testament to the transformative power of fiction.

Alison MacLeod is the author of three novels – The Changeling, The Wave Theory of Angels and Unexploded, which was longlisted for the Man Booker Prize 2013 – and two story collections. She is the joint winner of the Eccles British Library Writer's Award 2016 and was a finalist for the 2017 Governor General's Award. She was Professor of Contemporary Fiction at the University of Chichester until 2018, when she became Visiting Professor to write full-time. She lives in Brighton.

“Tenderness is a passionate, epic joy. It's a paean to artistic imagination and freedom, and also to the messy complexity of humanity. The characters leap from the page with astonishing life that is all the more impressive given their historical fame. MacLeod's prose is a masterclass - gripping, lyrical, witty, razor-sharp and filled with, yes, tenderness. I will never forget it.” —Madeline Miller, author of CIRCE

“Tenderness is a triumph and it will conquer your heart. Stunning, illuminating, but also, profoundly moving.” —Elif Shafak, author of THE ISLAND OF MISSING TREES

“What a triumph of skill and imagination is this powerful, moving, brilliant novel! I've never read anything quite like TENDERNESS, and I doubt I ever will again. This is more than a book about a book; this is a book about living - about really living, at the most dangerous and beautiful edges of the human experience. I stand in awe of Alison MacLeod. She is a novelist operating at the peak of her powers - no less a genius than the master whose work she has so lovingly and shrewdly explored here. She moves across time and space like a wizard, wrapping up fact within fiction so magically that you can't find a seam anywhere. TENDERNESS is an utterly captivating read, and I came away from it with this astonished thought: There's nothing this writer can't do.” —Elizabeth Gilbert

“An ambitious sprawl of a book, splendidly extreme in its magnitude, yet always elegant; a defence of complicated thinking and embodied life.” —The Guardian

“This novel has an expansive reach. Humans are contradictory, time folds in on itself, and literature informs life. Quotes from Lawrence's writing, his contemporaries' poems, and even this novel itself are layered through the book as if seen through a scrim behind the novel's primary text.” —Historical Novel Society

"’Every story,’ MacLeod argues in an afterword, ‘is a story of ‘What If.’ … unexpectedly convincing … against all odds, it [works]." - New York Times Book Review

“Magnificent . . . MacLeod covers an astonishingly broad range of incidents, eras, and themes in vivid prose, and depicts Lawrence's supporters and opponents with equal insight and sympathy. . . . A triumphant demonstration of that power, this places MacLeod among the best of contemporary novelists.” —Publishers Weekly, starred review

“Brilliant . . . MacLeod evokes Lawrence's world beautifully, and her Kennedy subplot works shockingly well, as does the students' relationship, which evokes the passion that powered all of Lawrence's work . . . brimming with deeply felt life.” —Booklist, starred review

“As sublimely crafted as a novel could ever be. Tenderness is an intricate, mesmerising tapestry of love and regret, prudery and desire, loneliness and togetherness, loyalty and betrayal, and the enigmas and conundrums involved in the art of committing these experiences to the page.” —Isabella Tree, author of WILDING

“Alison MacLeod has bored deep into significant cultural fault-lines of the twentieth century: D.H. Lawrence's grappling with Edwardian England's psychological timidity; America's moment of political optimism with the Kennedys; the trial of Lady Chatterley's Lover. She has disentangled connections--roots--between them and their participants, and emerged with a great sweeping symphony of a novel.” —Tim Pears, author of The West Country trilogy

"Tenderness has all the elements of great historically based fiction, from vivid characters to resonant contemporary concerns, and it succeeds in delivering a powerful story beautifully told." -Center of Fiction

"Time stretches from 1915 to 1960 in an elaborate braid of real historical events and characters' private activities and thoughts … [A] dance between historic fact, plausible maybes and imagination" - Bookreporter.com