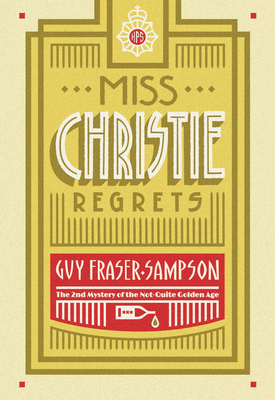 
Coming Soon - Available for Pre-Order Now
The past may be another country, but so is Canada, and it's pretty easy to get there. Nowhere is this more apparent than at the Hampstead police station, in London, where aspects of the past keep turning up, cluttering what would otherwise be ordinary 21st-century crime scenes.

Take this murder at Burgh House, a local cultural center. It's peculiar enough on its own—the victim appears to have been attacked with a police truncheon—but gets even weirder when a second body turns up, with links to the first. This one, though, has been hidden since the 1930s. The cops can date it definitively, thanks to the presence of some letters written at the time of that long-ago killing. Letters from a certain Miss Christie.

Guy Fraser-Sampson is the author of three "Mapp and Lucia" books, which have been featured on BBC Radio and optioned by BBC TV. In his spare time he is an internationally known expert in financial management, with experience in the US, the UK, and the Middle East. He has written several bestselling books on investment strategy, lectures frequently on finance and economics, and is a professor and Senior Fellow at the Cass Business School in London.