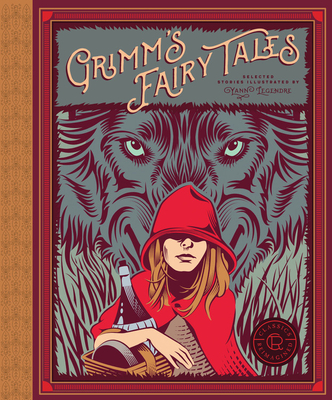 The classic fairy tales of the Brothers Grimm are reimagined through the deft illustrations of internationally recognized artist Yann Legendre in this paperback edition of Classics Reimagined, Grimm’s Fairy Tales.

French artist Yann Legendre takes readers on a beautiful journey through the classic stories of the Brothers Grimm with his superbly illustrated insight. These stories take on a whole new meaning when accompanied by Legendre's mystical, colorful interpretations; you've never seen illustrations of Cinderella or The Frog King like this before! Light a fire in the fireplace, get cozy with a blanket in your favorite chair, and enjoy this collection of the best known fairy tales out there.

The Classics Reimagined series is a library of stunning collector's editions of unabridged classic novels illustrated by contemporary artists from around the world. Each artist offers his or her own unique, visual interpretation of the most well-loved, widely read, and avidly collected literature from renowned authors. From The Adventures of Sherlock Holmes to The Wonderful Wizard of Oz and from Jane Austen to Edgar Allan Poe, collect every beautiful volume.

Wilhelm Grimm (1786–1859), German author and cultural researcher, was one half of the Grimm Brothers; authors of some of the most popular and best-known European fairy tales. He was born in the town of Hanau, in what was at the time the Holy Roman Empire. He was a graduate of the University of Marburg.

Jacob Grimm (1785–1863), one half of of the renowned Brothers Grimm, was a German philologist, jurist, and mythologist. He was also a linguist, and discoverer of "Grimm's law," and wrote several of the West's best known fairy tales along with his brother Wilhelm. He was born in the town of Hanau, in what was at the time the Holy Roman Empire. He was a graduate of the University of Marburg.

Yann Legendre is an internationally recognized illustrator, designer, and art director based in Paris. His illustrations have appeared in The Wall Street Journal, The New York Times, The New Yorker, The Reader, Perspective Magazine, le Monde, and more. He is the art director of the French publisher Inculte, designing each book cover and every illustrated book series. He regularly creates illustrations for Universal Music in London, the Steppenwolf Theater in Chicago, Janus Films, and the Criterion Collection in New York. In 2011, CB2 (Crate&Barrel) commissioned him to illustrate a new collection of furniture called "Fresh Ink". In 2010, he started a collaboration with the filmmaker Joe Swanberg, designing and illustrating all of the director's movie posters. Yann received an Award of Excellence for the best movie poster design from the South by Southwest Film Festival.