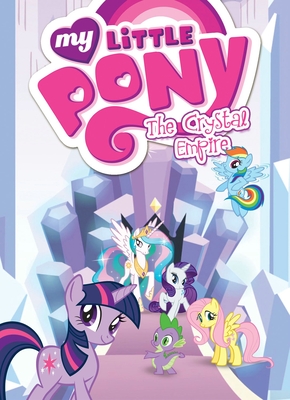 
Special Order
The celebrated animated series comes to book shelves! Revisit the inhabitants of Equestria and learn about the magic that friendship brings in this adaptation of the television series.

When the Crystal Empire returns after a thousand years of darkness, Princess Celestia knows there's only one pony who can help–Twilight Sparkle! But it'll take a little magic and a lot of help to ensure that Twilight saves the empire... and passes her test!

This volume adapts the Season Two finale-event "The Crystal Empire" parts 1 & 2.
Meghan McCarthy is a co-executive producer, screenwriter, and lyricist for My Little Pony Friendship is Magic. She is credited as story editor for seasons three, four, and the second half of season five. She has also written and helped produce My Little Pony Equestria Girls and its 2014 sequel. She also wrote and co-executive produced 2017's My Little Pony: The Movie.