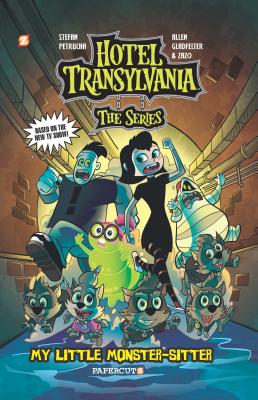 This is book number 2 in the Hotel Translyvania series.

Based on the all-new television series focusing on the earlier teenage years of Dracula’s daughter Mavis and her three closest friends, Hank N. Stein, Pedro and Wendy Blob. With Dracula away on “Official Vampire Business,” Mavis finally sees her chance to show her father what she can do. With the help of her friends, she decides to put her brilliant ideas of how to run the Hotel into motion, but—enter Aunt Lydia, Dracula’s older and authoritarian sister. While Mavis and friends are ready to let loose and have fun, Aunt Lydia pushes for even more order and tradition at the Hotel.
STEFAN PETRUCHA is the author of such YA series as Timetripper, Split, and The Rule of Won, as well as THE THREE STOOGES, POWER RANGERS, PAPERCUTZ SLICES, and many other series from Papercutz. He has written X-Files comics, Disney comics, and he was nominated for a Stoker Award for his graphic novel, Kolchak: The Devil in the Details.