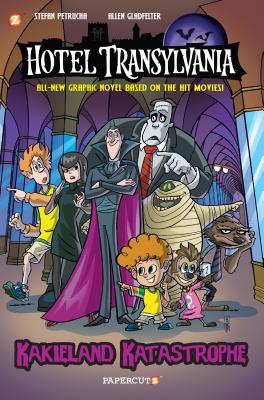 This is book number 1 in the Hotel Translyvania series.

The debut Hotel Transylvania graphic novel based on the movies! Horror author Stephen Cling visits Hotel Transylvania to try and prove monsters are still dangerous. Dracula, his daughter and her family, and the Drac pack are anything but! However, when a human child goes missing, it is up to Drac, Mavis, and the rest of the Hotel crew to locate the child before their monstrous reputation gets them chased out of town.
STEFAN PETRUCHA is the author of such YA series as Timetripper, Split, and The Rule of Won, as well as NANCY DREW DIARIES, POWER RANGERS, PAPERCUTZ SLICES, and many other series from Papercutz. He has written X-Files comics for Topps, Disney comics for Egmont, and he was nominated for a Stoker Award for his graphic novel,Kolchak: The Devil in the Details.