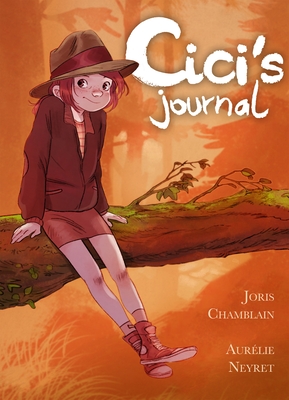 Cici dreams of being a novelist. Her favorite subject: people, especially adults. She’s been watching them and taking notes. Everybody has one special secret, Cici figures, and if you want to write about people, you need to understand what’s hiding inside them. But now she’s discovered something truly strange: an old man who disappears into the forest every Sunday with huge pots of paint in all sorts of colors. What is he up to? Why does he look so sad when he comes back?

In a graphic novel interwoven with journal notes, scrapbook pieces, and doodles, Cici assembles clues about the odd and wonderful people she’s uncovered, even as she struggles to understand the mundane: her family and friends.

Joris Chamblain is a French comic writer and author of children’s books known in particular for having published, in collaboration with the illustrator Aurélie Neyret, his first comic book series Cici’s Journal (Les Carnets de Cerise in French) which won the Youth Prize at the Angoulême International Comics Festival in 2014 and no less than twenty awards. Joris's comics are translated in about fifteen countries.

Aurélie Neyret is an illustrator from Lyon, France. When she was little, she dreamed of living on a boat; collected all sorts of strange and useless things; and loved to hide away and read all night long, to build clubhouses, and—more than anything else—to draw! Today, her approach to life hasn’t changed much, and she works hard to bring her projects to fruition. After a brief time at the Émile Cohl school in Lyon, she decided to squirrel away in her secret hideout (location still unknown) so she could develop her style on her own. After that, she worked for La Presse international edition. She created illustrations for various kids’ magazines (J’aime Lire, Histoire Junior) and invited readers on an adventure with Les Vacances de Monsieur Rhino (Mister Rhino’s Vacation), a children’s book written by Raphaël Baud, published by Chocolat. After several graphic novel publications in anthologies, she and Joris Chamblain put together their first book: Les Carnets de Cerise (Cici’s Journal), originally published by the Métamorphose imprint of Soleil.

"The lessons are breezy, but the art is sumptuous: Neyret’s naturalistic illustrations have marvelous depth, with dense color, dynamic movement, and a fantastic use of light and shadow."—Booklist

"May have younger readers beginning their own writing, painting, or scrapbooking adventures." —Kirkus