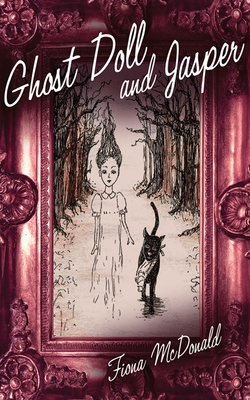 
Special Order
What happens when a broken doll is touched by stardust? She becomes a ghost doll, of course! The newly awakened Ghost Doll and her companion Jasper, a mangy black cat, set off in search of a safe place to live. But the city is new and dangerous territory for Ghost Doll (who fell asleep in quieter times). The noise and rush of traffic terrifies her, and as for the new style of toy—complete with computer chip and battery—she can’t think of anything worse. But there is something far more sinister and dangerous lurking in the city. Someone else witnessed the falling star and is anxious to get a hold of the fragment—and Ghost Doll—for his own evil purposes. How will Ghost Doll and Jasper escape their hunter and find a home where they both are safe and loved?

Fiona McDonald has created a visually stunning and poignantly told story about an unlikely friendship and the importance of feeling secure and wanted. Ghost Doll and Jasper is an Edward Gorey-esque graphic novel for kids—sure to captivate and enchant as the ethereal Ghost Doll and her alley cat Jasper embark on an adventure full of magic, suspense, and, most importantly, friendship.
Fiona McDonald has wanted to make beautiful things for a living since she was a little girl. To further this dream, she spent four years of intensive study at the Julian Ashton Art School in Sydney, Australia. From there she moved to the Blue Mountains and began making painted cloth dolls and figurative sculpture. After Fiona’s son was born, she enrolled at university to study literature. Fiona has two grown-up children and a granddaughter. She lives with her three dogs, cat, rabbit, and ancient hen.