Bad Machinery Vol. 10: The Case of the Severed Alliance (Paperback) 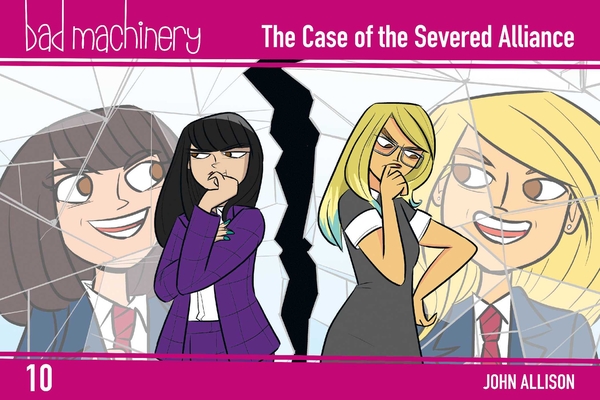 Bad Machinery Vol. 10: The Case of the Severed Alliance (Paperback)

This is book number 10 in the Bad Machinery series.

From the bestselling author of Giant Days comes the final pocket-sized volume in his beloved Bad Machinery series!

The mystery-solving teens of Tackleford are finding out that not every summer is a perfect one. Charlotte and Shauna, once inseparable, are decidedly on the outs. Mildred bounces between the formerly best friends while trying to save up money for a car. Amy’s rent at the antique store gets tripled, casting doubt on the future of her career. Meanwhile, the boys are channeling their energies into finding love down by the river, with only Jack’s acoustic guitar between them and “romance.” But tragedy strikes when they find that a developer has started building a huge condominium in their favorite swim spot. Unable to get a moment’s peace at home, Charlotte has no choice but to force her way into an internship at the local newspaper, unleashing her brand of maverick sleuthing on... blood pouring out of public art? Strange ooze coming up out of the ground? Shifty doings at the Chamber of Commerce? Classic Tackleford!

The Case of the Severed Alliance pits our favorite crew against the changing tide of time itself as friendships and romantic bonds are tested, and the inexorable wave of gentrification remakes Tackleford itself. Summer is just beginning... but it feels like The End for our heroes? That’s because it is the end: of Bad Machinery!
Born in a hidden village deep within the British Alps, John Allison came into this world a respectable baby with style and taste. Having been exposed to American comics at an early age, he spent decades honing his keen mind and his massive body in order to burn out this colonial cultural infection. One of the longest continuously publishing independent web-based cartoonists, John has plied his trade since the late nineties moving from Bobbins to Scary Go Round to Bad Machinery, developing the deeply weird world of Tackleford long after many of his fellow artists were ground into dust and bones by Time Itself. He has only once shed a single tear, but you only meet Sergio Aragon's for the first time once. John resides in Letchworth Garden City, England, and is known to his fellow villagers only as He Who Has Conquered.