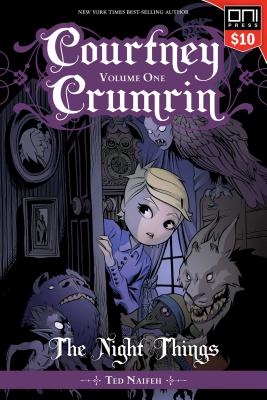 This is book number 1 in the Courtney Crumrin series.

Courtney Crumrin grumbles about everything, but now she's really got something to grumble over. Having run out of credit cards, her parents are moving to the wealthy suburb of Hillsborough, to live rent-free with their creepy old uncle Aloysius. Courtney is now an outcast among her rich, snobby classmates.

And if that weren't bad enough, the musty, decrepit old mansion that she now calls home is occupied by stranger creatures than just her parents or Uncle Aloysius. They crawl about the house, just out of sight. They crunch bones in the corner. They climb up on the bed and watch Courtney while she sleeps. Mom and Dad don't notice them, but Uncle Aloysius calls them the Night Things.
Warren Wucinich is an illustrator, colorist, and part-time carny currently living in Dallas, TX. When not making comics he can usually be found watching old Twilight Zone episodes and eating large amounts of pie.
"Courtney Crumrin is a fun series, cover to cover. It takes its time in introducing the world before jumping headlong into it. It can be funny, serious, and poignant, but it is always entertaining. Readers of any age will enjoy this series, but tweens and teens will get the biggest kick out it."
— School Library Journal

"Naifeh has written a masterpiece of middle school angst drawing on the work of Edward Gorey."
— Publishers Weekly