Running the Rift: A Novel (Paperback) 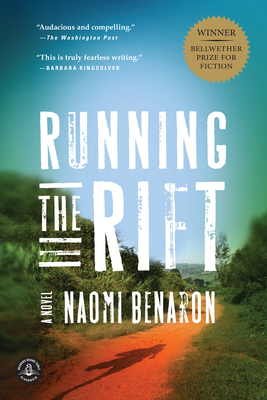 Running the Rift: A Novel (Paperback)

“Named for the Rwandan god of thunder, Jean Patrick Nkuba is destined for Olympic glory. Pushing his body up the misty hills of his village, he dreams not only of fame, but also of bringing peace to his country and equality to his Tutsi compatriots. When the floodwaters of hatred and war with the Hutu burst out over his homeland, Jean Patrick must run a different kind of race in order to survive. Both beautiful and heart-rending, horrific and hopeful, this novel carries a message that deserves to be widely read.”
— Amanda Hurley, Inkwood Books, Tampa, FL

Running the Rift follows the progress of Jean Patrick Nkuba from the day he knows that running will be his life to the moment he must run to save his life. A naturally gifted athlete, he sprints over the thousand hills of Rwanda and dreams of becoming his country’s first Olympic medal winner in track. But Jean Patrick is a Tutsi in a world that has become increasingly restrictive and violent for his people. As tensions mount between the Hutu and Tutsi, he holds fast to his dream that running might deliver him, and his people, from the brutality around them.

Winner of the Bellwether Prize for Socially Engaged Fiction, Naomi Benaron has written a stunning and gorgeous novel that—through the eyes of one unforgettable boy— explores a country’s unraveling, its tentative new beginning, and the love that binds its people together.

Naomi Benaron holds an MFA from Antioch University and an MS from Scripps Institution of Oceanography. She is also an Ironman triathlete. She teaches for UCLA Extension Writers’ Program, mentors for the Afghan Women’s Writing Project, and has worked extensively with genocide survivor groups in Rwanda. For more information, visit www.naomibenaron.com. Naomi Benaron is available for select speaking engagements. contact speakersbureau@workman.com.

"In Naomi Benaron's Running the Rift, a novel full of unspeakable strife but also joy, humor, and love, "hope always [chases] close on the heels of despair," thanks to a writer who knows when to keep a steady pace and when to explode into an all-out sprint." —O, The Oprah Magazine

"Running the Rift encourages us to see the world as a whole, despite the simmering divisions that constantly threaten to erupt. The genocide scars Jean Patrick and scuttles his personal Olympic dream. But other seemingly impossible dreams are realized in this accomplished, comprehending and generous first novel." —Kansas City Star

“Running the Rift does not spare readers the horrors of the violence in Rwanda, but never loses sight of the beauty—the love and, yes, the hope—that persists even amid such a desperate situation." —The Wichita Eagle

“This well written and well researched novel is an impressive debut.”—The Seattle Times

"An auspicious debut . . . Having worked extensively with genocide survivor groups in Rwanda, Benaron clearly acquired a very lucid sense of her characters' lives and of the horrors they endured. Her story tells, with compelling clarity, of Rwandan Tutsi youth, Jean Patrick Nkuba--who dreams of becoming Rwanda's first Olympic medalist. It's a dream he must postpone for more than a decade as the internecine savagery, Hutu vs. Tutsi, slaughters millions and derails the lives of countless others. While it would be counterintuitive to pronounce this a winning, feel-good story, there is something to be said for hope restored. And Naomi Benaron's characters say it well."—The Daily Beast

"This debut novel set against the backdrop of Rwanda's ethnic conflict is a powerful coming-of-age story that highlights the best and worst of human nature."—Christian Science Monitor

"Benaron's focus on this one young man is part of the book's brilliance . . . Benaron writes beautifully about the pain and exhilaration of being an Olympic-level runner (she's a triathlete) . . . It's unbearable, Benaron's genius is that we read on despite it." —BookPage

"This debut novel won the Bellwether Prize, created and funded by author Barbara Kingsolver to promote fiction that addresses issues of social justice. A more fitting choice would be hard to find." —Shelf Awareness

“In a finely crafted story of dreams, illusions, hard reality, and reaching the other side of fear, Benaron has bestowed upon the world a story that illuminates events on a national scale by showing their effects at the personal level.”—ForeWord Reviews

"Benaron accomplishes the improbable feat of wringing genuine loveliness from unspeakable horror . . . It is a testament to Benaron's skill that a novel about genocide . . . conveys so profoundly the joys of family, friendship, and community." —Publishers Weekly, starred review

“Awarded the prestigious Bellwether Prize for its treatment of compelling social issues, Benaron’s first novel is a gripping, frequently distressing portrait of destruction and ultimate redemption... Benaron sheds a crystalline beacon on an alarming episode in global history, and her charismatic protagonist leaves an indelible impression.”—Booklist

"First novelist Benaron, who has actively worked with refugee groups, won the 2010 Bellwether Prize for Socially Engaged Fiction for this unflinching and beautifully crafted account of a people and their survival. In addition, she compellingly details the growth and rigorous training of a young athlete. . . Highly recommended; readers who loved Khaled Hosseini's The Kite Runner will appreciate."—Library Journal, starred review

"The politics will be familiar to those who have followed Africa’s crises (or seen Hotel Rwanda), but where Benaron shines is in her tender descriptions of Rwandan’s natural beauty and in her creation of Jean Patrick, a hero whose noble innocence and genuine human warmth are impossible not to love." —Kirkus Reviews, starred review

“Rich characterization and insights about Rwandan culture make this book a pleasure to read, and Jean Patrick impossible not to root for . . . Running the Rift is a profound display of imagination and empathy. Benaron writes like Jean Patrick runs, with the heart of a lion.”
—The Dallas Morning News

“[Benaron] writes with an earnest clarity, bringing the boy to manhood and imparting to readers a culturally rich and unflinching story of resilience and resistance.”
—Chicago Tribune, editor’s choice

“A novel full of unspeakable strife but also joy, humor, and love.”
—O: The Oprah Magazine

“A powerful coming-of-age story that highlights the best and the worst of human nature.”
—The Christian Science Monitor

“[An] unflinching and beautifully crafted account of a people and their survival. In addition, she compellingly details the growth and rigorous training of a young athlete . . . Highly recommended; readers who loved Khaled Hosseini’s The Kite Runner will appreciate.”
—Library Journal, starred review