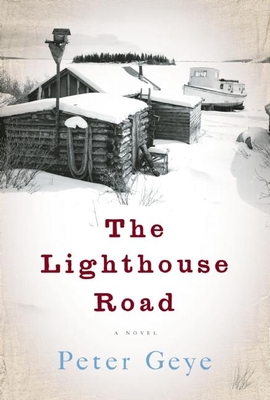 “The hurts and burdens of the past as well as the cold and unforgiving North Country conspire against the happiness of the beautifully drawn characters in Geye's latest novel. Even on a journey to a new town in a specially crafted boat, Rebekah and Odd cannot escape the past. People are not always what they seem to be in this story, and outcomes cannot be predicted. A compelling read from an author of great skill and versatility.”
— Vicki Erwin, Main Street Books, St.Charles, MO

A novel of scandal and ice, Lighthouse Road is an exceptional work.
Peter Geye's second novel is a tale of love, betrayal, hope, and loss.
It runs the gamut of human emotion, immersing the reader into a
complicated relationship between an older woman and a younger man in the
1890s. I guarantee most readers will close the book with a bang and
immediately pick up the phone to call someone to talk about it. Perfect
for book clubs!

— Jessilynn
Against the wilds of sea and wood, a young immigrant woman settles into life outside Duluth in the 1890s, still shocked at finding herself alone in a new country, abandoned and adrift; in the early 1920s, her orphan son, now grown, falls in love with the one woman he shouldn t and uses his best skills to build them their own small ark to escape. But their pasts travel with them, threatening to capsize even their fragile hope. In this triumphant new novel, Peter Geye has crafted another deeply moving tale of a misbegotten family shaped by the rough landscape in which they live--often at the mercy of wildlife and weather--and by the rough edges of their own breaking hearts.
Peter Geye received his M.F.A. from the University of New Orleans and his Ph.D. from Western Michigan University, where he was editor of Third Coast. Also the author of the award-winning novel, Safe from the Sea, he lives in Minnesota.