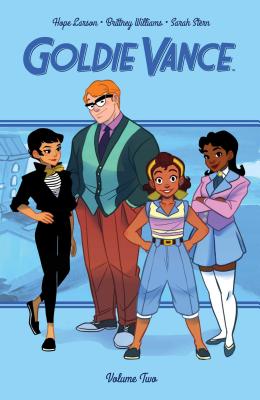 This is book number 2 in the Goldie Vance series.

Nancy who? Goldie Vance is on the case! The adventures of the teen sleuth continue in this second volume of the hit comic book series.

The adventures of Goldie Vance, teen super sleuth, continue in the second volume of this hit comic adventure. Collects issues #5-8 of the series.

Sixteen-year-old Marigold “Goldie” Vance lives at a Florida resort with her dad, who manages the place. Her mom, who divorced her dad years ago, works as a live mermaid at a club downtown. Goldie has an insatiable curiosity, which explains her dream to one day become the hotel’s in-house detective. When Charles, the current detective, encounters a case he can’t crack, he agrees to mentor Goldie in exchange for her help solving the mystery.