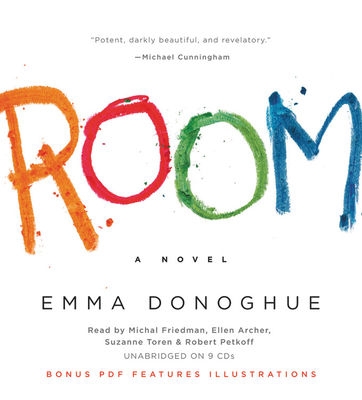 — Rachel
Held captive for years in a small shed, a woman and her precocious young son finally gain their freedom, and the boy experiences the outside world for the first time. To five-year-old-Jack, Room is the world. . . . It's where he was born, it's where he and his Ma eat and sleep and play and learn. At night, his Ma shuts him safely in the wardrobe, where he is meant to be asleep when Old Nick visits. Room is home to Jack, but to Ma it's the prison where she has been held for seven years. Through her fierce love for her son, she has created a life for him in this eleven-by-eleven-foot space. But with Jack's curiosity building alongside her own desperation, she knows that Room cannot contain either much longer. Room is a tale at once shocking, riveting, exhilarating -- a story of unconquerable love in harrowing circumstances, and of the diamond-hard bond between a mother and her child.
Born in Dublin in 1969, Emma Donoghue is an Irish emigrant twice over: she spent eight years in Cambridge doing a PhD in eighteenth-century literature before moving to London, Ontario, where she lives with her partner and their two children. She also migrates between genres, writing literary history, biography, stage and radio plays as well as fairy tales and short stories. She is best known for her novels, which range from the historical (Frog Music, Slammerkin, Life Mask, Landing, The Sealed Letter) to the contemporary (Akin, Stir-Fry, Hood, Landing). Her international bestseller Room was a New York Times Best Book of 2010 and was a finalist for the Man Booker, Commonwealth, and Orange Prizes.

"Emma Donoghue's writing is superb alchemy, changing innocence into horror and horror into tenderness. Room is a book to read in one sitting. When it's over you look up: the world looks the same but you are somehow different and that feeling lingers for days."
-Audrey Niffenegger, author of The Time Traveler's Wife and Her Fearful Symmetry

"I loved Room. Such incredible imagination, and dazzling use of language. And with all this, an entirely credible, endearing little boy. It's unlike anything I've ever read before."
-Anita Shreve, author of The Pilot's Wife and A Change in Altitude

"Room is one of the most profoundly affecting books I've read in a long time. Jack moved me greatly. His voice, his story, his innocence, his love for Ma combine to create something very unusual and, I think, something very important. I read the book over two days, desperate to know how their story would end . . . Room deserves to reach the widest possible audience."
-John Boyne, author of The Boy in the Striped Pajamas

"Room is that rarest of entities, an entirely original work of art. I mean it as the highest possible praise when I tell you that I can't compare it to any other book. Suffice to say that it's potent, darkly beautiful, and revelatory."
-Michael Cunningham, author of The Hours and By Nightfall

"Powerful.... Seen entirely through Jack's eyes and childlike perceptions, the developments in this novel--there are enough plot twists to provide a dramatic arc of breathtaking suspense--are astonishing.... Donoghue brilliantly portrays the psyche of a child raised in captivity...will keep readers rapt."
-Publishers Weekly

"Talented, versatile Donoghue relates a searing tale of survival and recovery, in the voice of a five-year-old boy.... Donoghue brilliantly shows mother and son grappling with very different issues as they adjust to freedom.... In the story's most heartbreaking moments, it seems that Ma may be unable to live with the choices she made to protect Jack. But his narration reveals that she's nurtured a smart, perceptive and willful boy--odd, for sure, but resilient, and surely Ma can find that resilience in herself.... Wrenching, as befits the grim subject matter, but also tender, touching and at times unexpectedly funny."
-Kirkus