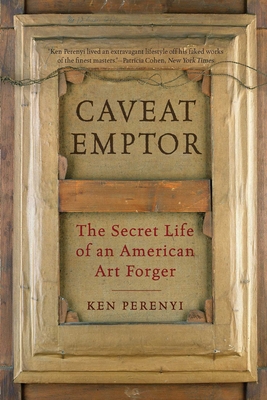 
Email or call for price
For years, Ken Perenyi raked in riches forging masterpieces, convincing even the most discerning experts that his works were the real deal. His works are so flawless that they are still appearing as originals in auction house catalogs, fine art, design and architecture magazines, unexposed as the forgeries they really are. Growing up as a working class kid in Fort Lee, New Jersey, Perenyi never dreamed of becoming an art forger. However, when he stumbled upon The Castle, a large crumbling estate in his neighborhood, he found himself in the middle of the New York avant-garde art scene. Under their mentorship, he discovered he possessed a preternatural ability to copy the works of old masters, an ability that confounded even the most qualified experts and catapulted him to a life of riches. Honest, gripping and astounding, Caveat Emptor reveals the ironies and hypocrisies latent to the art world, plus an explanation of just exactly how Perenyi managed to pull it off.
Born in 1949 in Hoboken, New Jersey, Ken Perenyi is a self-taught artist who painted his first pictures during the Summer of Love in 1967, having discovered an uncanny ability to intuitively grasp the aesthetic and technical aspects of the Old Masters. A series of fateful events resulted in what was to become a thirty-year career as a professional art forger. Today he operates his own studio in Madeira Beach, Florida.

Ken Perenyi lived an extravagant lifestyle off his faked works of the finest masters. Then two F.B.I. agents showed up on his doorstep, curious about a couple of paintings sold at Christie’s and Sotheby’s, but actually his own meticulous creations.
— Patricia Cohen