Our Magnificent Bastard Tongue: The Untold History of English (Paperback) 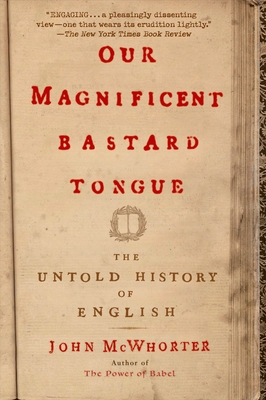 Our Magnificent Bastard Tongue: The Untold History of English (Paperback)

“John McWhorter's Our Magnificent Bastard Tongue offers very interesting ideas about the history of the English language and why it has come to be the way it is today. This very readable book will make you think about English in a new way.”
— Catherine Carpenter, Cate's Books and Stuff, Louisiana, MO

A survey of the quirks and quandaries of the English language, focusing on our strange and wonderful grammar

Why do we say “I am reading a catalog” instead of “I read a catalog”? Why do we say “do” at all? Is the way we speak a reflection of our cultural values? Delving into these provocative topics and more, Our Magnificent Bastard Language distills hundreds of years of fascinating lore into one lively history.

Covering such turning points as the little-known Celtic and Welsh influences on English, the impact of the Viking raids and the Norman Conquest, and the Germanic invasions that started it all during the fifth century ad, John McWhorter narrates this colorful evolution with vigor. Drawing on revolutionary genetic and linguistic research as well as a cache of remarkable trivia about the origins of English words and syntax patterns, Our Magnificent Bastard Tongue ultimately demonstrates the arbitrary, maddening nature of English— and its ironic simplicity due to its role as a streamlined lingua franca during the early formation of Britain. This is the book that language aficionados worldwide have been waiting for (and no, it’s not a sin to end a sentence with a preposition).
John McWhorter is the author of the bestseller Losing the Race: Self-Sabotage in Black America, The Power of Babel: A Natural History of Language, and four other books. He is associate professor of linguistics at the University of California at Berkeley, a senior fellow at the Manhattan Institute, and a contributing editor to The City Journal and The New Republic. He has been profiled in the Los Angeles Times, The Washington Post, The Philadelphia Inquirer, and has appeared on Dateline NBC, Politically Incorrect, and The NewsHour with Jim Lehrer.