The Antisocial Network: The Gamestop Short Squeeze and the Ragtag Group of Amateur Traders That Brought Wall Street to Its Knees (Compact Disc) 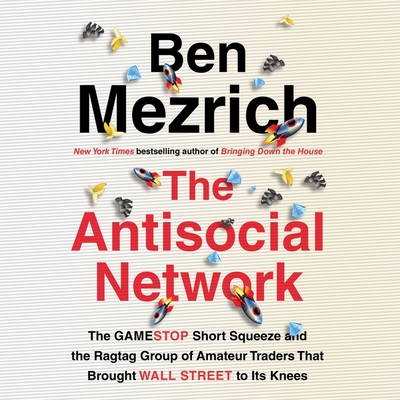 The Antisocial Network: The Gamestop Short Squeeze and the Ragtag Group of Amateur Traders That Brought Wall Street to Its Knees (Compact Disc)

The definitive account of the story of the year, the can't-make-this-up Gamestop short squeeze--a David vs. Goliath tale of fortunes won and lost overnight that changed Wall Street forever.In The Antisocial Network, bestselling author Ben Mezrich tells the true story of the subreddit WallStreetBets, a loosely affiliated group of private investors and internet trolls who took down one of the biggest hedge funds on Wall Street, and in so doing, fired the first shot in a revolution that threatens to upend the financial establishment. Told with deep access, from multiple angles, it examines the culmination of a populist movement that began with the intersection of social media and the growth of simplified, democratizing financial portals--represented by the biggest upstart in the business, RobinHood, and its millions of mostly millennial devotees.The unlikely focus of the battle: GameStop, a flailing brick and mortar dinosaur catering to teenagers and outsiders, that had somehow outlived forbearers like Blockbuster Video and Petsmart as the world rapidly moved online. The story comes to a head in a wild battle between Melvin Capital, a 13-billion-dollar hedge fund, one of the most respected and staid funds on the Street, and a disparate group of amateur day traders, video game nuts, and internet trolls on a subreddit calling itself WallStreetBets. At first, the subreddit was a joke--a meme-filled, freewheeling place to share shoot-the-moon investment tips, laugh about big losses, and diamond hand emojis. Until some members noticed an opportunity--and rode a rocket ship to tens of millions of dollars in earnings overnight.