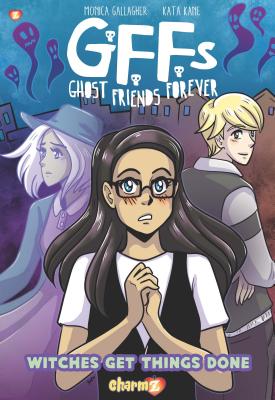 
Special Order
Magic is the only thing that will help Sophia Greene-Campos reunite with Whitney, her ghost girl crush who died in the 1990s. Frustrated, Sophia turns to the one group that she knows she can learn from - Spectreville High’s Wiccans & Witchcraft Club. Technically the club is only allowed to study magic and not actually practice it, but Sophia befriends a witch named Charlotte who shows her they don’t all follow school rules. While Sophia is busy disobeying her parents, her ex-boyfriend Jake is struggling between expressing his romantic feelings for her and helping her to get Whitney back. And Felix is suffering the nightmarish after effects of creating a Banishment Portal at such a young age. In order to help him, Joanne and Oscar might be forced to reveal more of their knowledge about portals, two-headed poltergeists, and other secrets about The Paranormal Incident that split the family.

MONICA GALLAGHER is an indie creator with over ten years experience making comics and illustrations with positive, feminist spin. She has worked for Oni Press, Vertigo, and Valiant, and has published several of her own mini-comics and books.

KATA KANE is an illustrator, designer, and comic book artist best known as the creator of "Altar Girl," an all-ages manga style graphic novel and ongoing webcomic series commended as the "cute shoujo manga with a spine of steel!"- (Girls Like Comics).