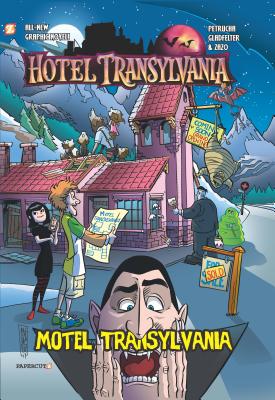 This is book number 3 in the Hotel Translyvania series.

Jonathan, yearning to be a part of the hotel business like his father-in-law, Drac, opens a motel in the Swiss alps. With the help of his wife, Mavis, and little Dennis, the family remodels a run down motel to tip-top monster shape! But after numerous mishaps, monsters won’t even check in! Not even humans will check in! It’s up to Jonathan to get to the bottom of the mystery and save Motel Transylvania!

STEFAN PETRUCHA is the author of such YA series as Timetripper, Split, and The Rule of Won, as well as NANCY DREW DIARIES, POWER RANGERS, PAPERCUTZ SLICES, and many others from Papercutz. He has written X-Filescomics for Topps, Disney comics for Egmont, and was nominated for a Stoker Award for Kolchak: The Devil in the Details.

ALLEN GLADFELTER wanted to draw comics when he was a kid. Now he’s a grown-up and he draws comics. Some would call that success. So far, Allen has drawn comics for Disney, Pixar, Dreamworks, Sony and quite a few other cool companies; and also done some concept art and character design for mobile game and cartoon animation studios. Allen is also an art teacher and a frequent art student at his local University. His favorite things to draw are fast cars, old buildings, pretty ladies and cool dudes. He prefers to draw by hand, the old fashioned way.