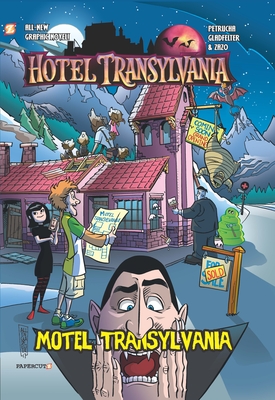 An all-new story taking place before and tying into the third Hotel Transylvania movie! Jonathan, yearning to be a part of the hotel business like his father-in-law, Drac, opens a motel in the Swiss alps. With the help of his wife, Mavis, and little Dennis, the family remodels a run down motel to tip-top monster shape! But after numerous mishaps, monsters won’t even check in! Not even humans will check in! It’s up to Jonathan to get to the bottom of the mystery and save Motel Transylvania!
STEFAN PETRUCHA is the author of such YA series as Timetripper, Split, and The Rule of Won, as well as NANCY DREW DIARIES, POWER RANGERS, PAPERCUTZ SLICES, and many other series from Papercutz. He has written X-Files comics for Topps, Disney comics for Egmont, and he was nominated for a Stoker Award for his graphic novel,Kolchak: The Devil in the Details.