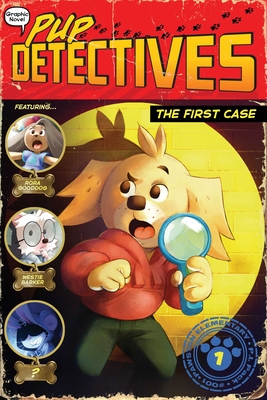 This is book number 1 in the Pup Detectives series.

In this first installment of the Pup Detectives graphic novel series, the pup detectives of Pawston Elementary join forces to solve the crimes happening all around them. Can they nab the lunchtime bandit who’s been stealing all the best snacks from the cafeteria?

Puppy PI Rider Woofson thought he was the only detective at Pawston Elementary, but while bringing down a pencil theft ring, he finds out that there are other super sleuths at school. Fortunately (or not!) there’s plenty of pet-ty crime happening at Pawston, so Rider joins forces with the other puppy PIs to form the PI Pack—the best (and only!) detective group at school.

Their first case is high stakes because it hits every student in the belly…a lunchtime bandit is stealing the best food from the cafeteria! Will the Pup Detectives bring the noodle nabber to justice, or will the hungry students of Pawston be left to endure Soup Surprise for lunch every day?
Felix Gumpaw grew up reading kids’ books, so it makes sense that he’s writing them now. And when he isn’t writing books, he’s out solving mysteries around the city of Manhattan, where he lives.