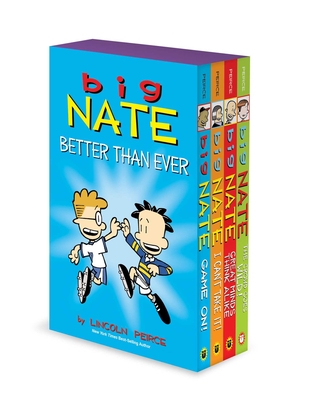 Now an animated series with Paramount+ and Nickelodeon!
One thousand pages of Big Nate hilarity!

Nate’s big ideas have inspired over 30 years of widely loved and kid-approved comics, and now you can collect some of his most memorable misadventures in this deluxe box set featuring four hilarious, full-color Big Nate books:
Lincoln Peirce has been drawing the Big Nate comic strip for more than 20 years. Born in Ames, Iowa, Peirce grew up in Durham, New Hampshire. As a kid, he began creating his own strips in the sixth grade. Peirce taught high school in New York City and has created several animated pilots for Cartoon Network and Nickelodeon. He lives in Portland, Maine, with his family.