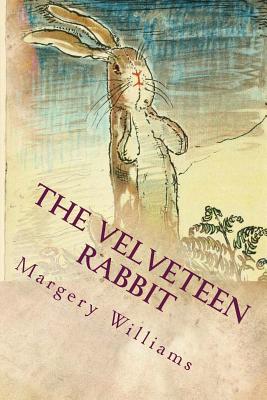 — Kirstyn
The Velveteen Rabbit, or How Toys Become Real: Illustrated. A children's novel written by Margery Williams and illustrated by William Nicholson. It chronicles the story of a stuffed rabbit and his quest to become real through the love of his owner. The book was first published in 1922 and has been republished many times since. The Velveteen Rabbit was Williams' first children's book. It has been awarded the IRA/CBC Children's Choice award. Based on a 2007 online poll, the National Education Association named the book one of its "Teachers' Top 100 Books for Children." A stuffed rabbit sewn from velveteen is given as a present to a small boy, but is neglected for toys of higher quality or function, which shun him in response. The rabbit is informed of magically becoming Real by the wisest and oldest toy in the nursery as a result of extreme adoration and love from children, and he is awed by this concept; however, his chances of achieving this wish are slight.