The Witch's Warning: Secrets of an Overworld Survivor, #5 (Hardcover) 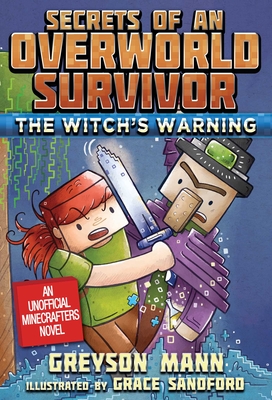 The Witch's Warning: Secrets of an Overworld Survivor, #5 (Hardcover)

This is book number 5 in the Secrets of an Overworld Survivor series.

When lightning hits Little Oak, one of Will and Mina's villager friends gets struck—and turned into a witch! Mina and Will sprint straight to the witch huts in the swamp, trying to save their friend. But instead of help, they find grave danger: witches with potions so powerful, Mina's own potions seem weak and useless.

When Mina falls victim to a witch’s potion, it's Will who has to perfect his potion-making skills. Can he remember what Mina taught him in time to save her from the deadly secrets swirling deep within the swamp?
Greyson Mann is the author of the Creeper Diaries series and the Secrets of an Overworld Survivor series from Sky Pony Press. He kept diaries like Gerald's when he was a middle schooler. He kept right on writing through high school and college and now creates books for kids from his home in Madison, Wisconsin. Greyson enjoys playing Minecraft with his nephew, sometimes writes bad rap songs, and hangs out with his three sisters, whom he now adores.