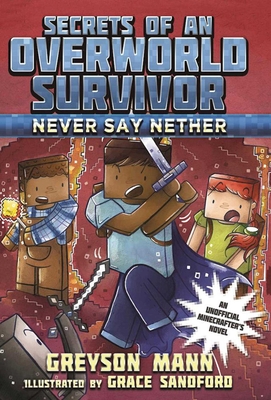 This is book number 4 in the Secrets of an Overworld Survivor series.

Kids love Minecraft. So, they will love going on a new adventure into the world they know and love. Beginning readers and young gamers alike will root for Will and Seth in this installment in the Secrets of an Overworld Survivor series!

Will can hardly wait to explore the Nether with his best friend, Mina. But when his perfect older brother insists on coming along, Will’s excitement fades—he is sure he doesn’t need Seth’s protection!

To prove it, Will challenges every mob they meet along the way to a fight. Will’s battle skills are improving, but when the trio reaches the Nether, they’re quickly in over their heads—and Will’s showing off puts everyone in danger! Can he learn to work together with his brother in order to survive?

This adventure series is created especially for readers who love the fight of good vs. evil, magical academies like Hogwarts in the Harry Potter saga, and games like Minecraft, Terraria, and Pokemon GO.
Greyson Mann is the author of the Creeper Diaries series and the Secrets of an Overworld Survivor series from Sky Pony Press. He kept diaries like Gerald's when he was a middle schooler. He kept right on writing through high school and college and now creates books for kids from his home in Madison, Wisconsin. Greyson enjoys playing Minecraft with his nephew, sometimes writes bad rap songs, and hangs out with his three sisters, whom he now adores.